PA's belated statement 'tone-deaf', but it has already apologised

Singapore—The People’s Association (PA) issued a rather belated statement concerning a wedding photo that had been used for a Hari Raya celebration without the couple’s permission, after the woman in the photo aired her views on social media.

And while the PA underlined that it had already apologised to the couple, Ms Sarah Bagharib and Mr Razif Abdullah, as well as posted a public apology, the organisation took umbrage at the allegations that the incident had been racist.

On May 28, Ms Sarah posted on her Instagram account that her wedding photo had been used as a standee with her and her husband’s faces cut out. She added that she had brought the matter “to the attention of the relevant parties.”

After the PA issued an apology, she wrote in another post on June 1 that she “acknowledged and appreciated” the gesture, but she also pointed out a “superficial understanding of the gravity of the issue” in the apology and said that “there is a larger issue affecting the wider Malay/Muslim community”.

And on June 14, almost two days after Ms Sarah responded to the post, the PA revived the matter.

In a lengthy Facebook post, it wrote that it wished “to clarify our position, elaborate on the steps we have taken to prevent such incidents from recurring, and hear her suggestions of how we might improve at the meeting”.

The PA wrote that in its emails to Ms Sarah, it had said the staff should have been more culturally sensitive, but added that “we should not form sweeping conclusions from this incident”.

It then tackled her accusations of racism, writing, “However, Ms Sarah has shared claims that this incident ‘perpetuate the racist culture’. She characterised this incident as ‘racist’. In her interview with Walid J. Abdullah, she also insinuated that our staff and volunteers did not find anything wrong with the standee as they might be ‘blind to racism’.

“These are accusations we reject. While the error was culturally insensitive, it was certainly not racist. It is not right to raise the allegation of racism, without basis, to stoke emotions and sentiments.”

It then went on to say that since Ms Sarah had called for others to “share your messages/suggestions to PA here and we’ll share them”, therefore elevating the discussion beyond the wedding photo standee incident, it saw “no point in proceeding with the meeting”.

The PA’s delayed and defensive response to Ms Sarah’s allegations has had both critics and supporters weighing in on the statement.

Critics have pointed out that the statement is tone-deaf, at the very least. 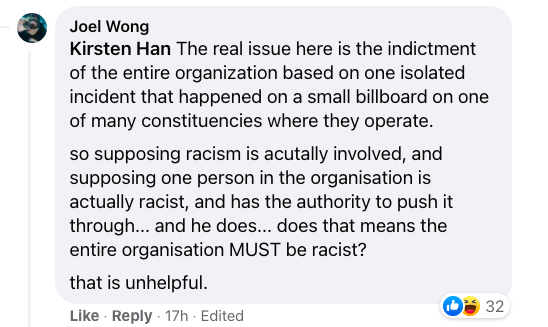 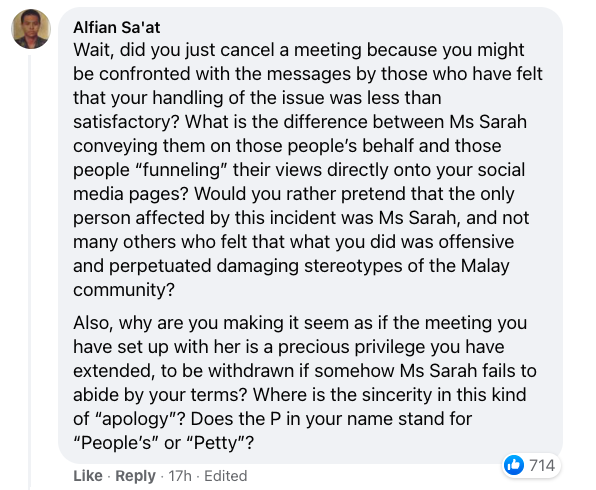 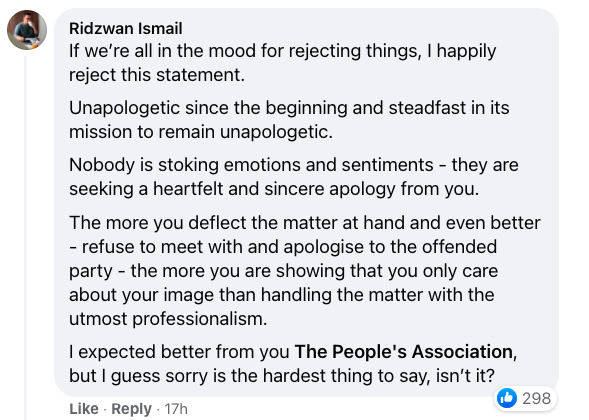 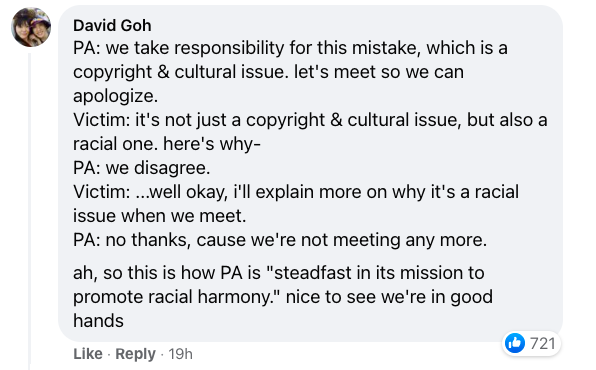 However, supporters have said that the PA has already apologised, and that the point is that the organisation as a whole should not be judged based on one incident. 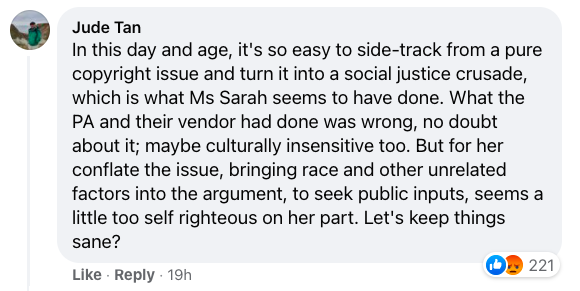 Read also: Woman whose wedding photo was used for Hari Raya celebration brings up lack of diversity in PA’s leadership