How can one learn a new language in a few months, the boy asks 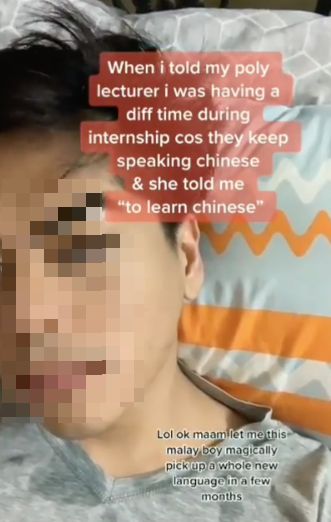 Singapore — A Malay student from a polytechnic took to social media to air a problem he faced during an internship.

The short clip had Mandarin and Hokkien vulgarities repeated as the soundtrack playing in the background.

While the youth did not say anything for the duration of the clip, he had the following text superimposed on it: “When i told my poly lecturer i was having a diff time during internship cos they keep speaking chinese & she told me ‘to learn chinese’”.

He explained that, to fit in better during an internship, his lecturer allegedly told him to “learn chinese”.

It is unclear which polytechnic he was from, or who his lecturer was. The boy added: “Lol ok maam (sic) let me this malay boy magically pickup a whole new language in a few months”.

The national languages of Singapore are English, Mandarin, Malay and Tamil, but English is the medium of instruction in schools where the students are also taught their mother tongue as a second language.

In 2019, in a statement to CNA, the Tripartite Alliance for Fair and Progressive Employment Practices (TAFEP) said that while language discrimination complaints continue to exist at the workplace, the number has decreased over the years.

It added that complaints about alleged workplace discrimination related to language have been on a downward trend in the last five years. These complaints involved discriminatory job advertisements, interview processes, and HR practices, TAFEP said.

Addressing concerns about job advertisements or interviews that may state preferred languages, TAFEP said: “The Tripartite Guidelines on Fair Employment Practices require employers to hire on the basis of merit and not use language as a limiting criterion during selection or recruitment.

“If the job requires the employee to use a specific language, the employer should justify how this criterion would apply, and affect the ability of the employee to perform the job.” /TISGFollow us on Social Media