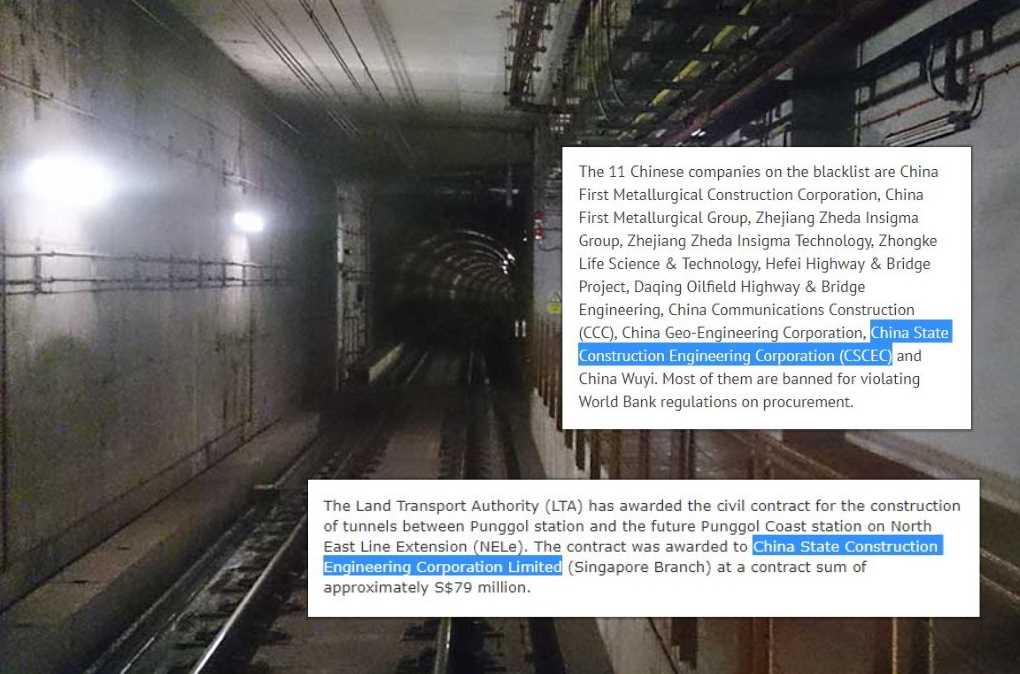 CSCEC won the contract with the lowest bid of $79 million. The contract involves the construction of an 830-metre tunnel between Punggol and the future Punggol Coast station. Works are expected to commence by this month and complete in 2023, LTA said.

However, a quick check online shows that CSCEC has been blacklisted by the World Bank before.

In 2011, the World Bank blacklisted eleven Chinese companies for corruption and fraud, according to a report by SCMP. Most of these Chinese firms were banned for violating World Bank regulations on procurement.

CSCEC was named as one of the eleven. Those banned by World Bank would not be eligible for World Bank-financed contracts and under a 2010 cross-debarment agreement, contractors debarred by the World Bank may also be debarred by other multilateral development banks such as the Asian Development Bank.

Poor-quality sea sand used in construction of skyscrapers in China

Four years ago (2013), Wired as well as Bloomberg reported about a sand scandal brewing in China at the time.

Shenzhen city inspectors discovered that low-quality concrete using raw, unprocessed sea sand had been used in the construction of at least 15 buildings in Shenzhen, including the Ping An Finance Centre, one of China’s tallest.

Both Wired and Bloomberg reported that construction of Ping An Finance Centre and others were halted by Shenzhen’s Housing and Construction Bureau.

Sea sand is far cheaper than river sand. Untreated sea sand is unsuitable for construction because it still contains chlorine and salt, which corrodes steel. River sand from freshwater channels doesn’t have this problem. It can take only a few decades for a building to become dangerously unsafe if untreated sea sand is used in its concrete.

As it turns out, the construction of Ping An Finance Centre was undertaken by CSCEC.

Bloomberg reported that Kong Qingping, CSCEC vice president, said at a press conference in Hong Kong at the time, “I’m not quite familiar with the incident of the Ping An Finance Center, but we put quality and safety as priority in all our projects in 40 cities, including Shenzhen.”

In any case, the construction of Ping An Finance Centre resumed thereafter.Follow us on Social Media