After sharing her ordeal online, this victim is subjected to cyber bullying instead and received aggressive comments from some of her Facebook friends 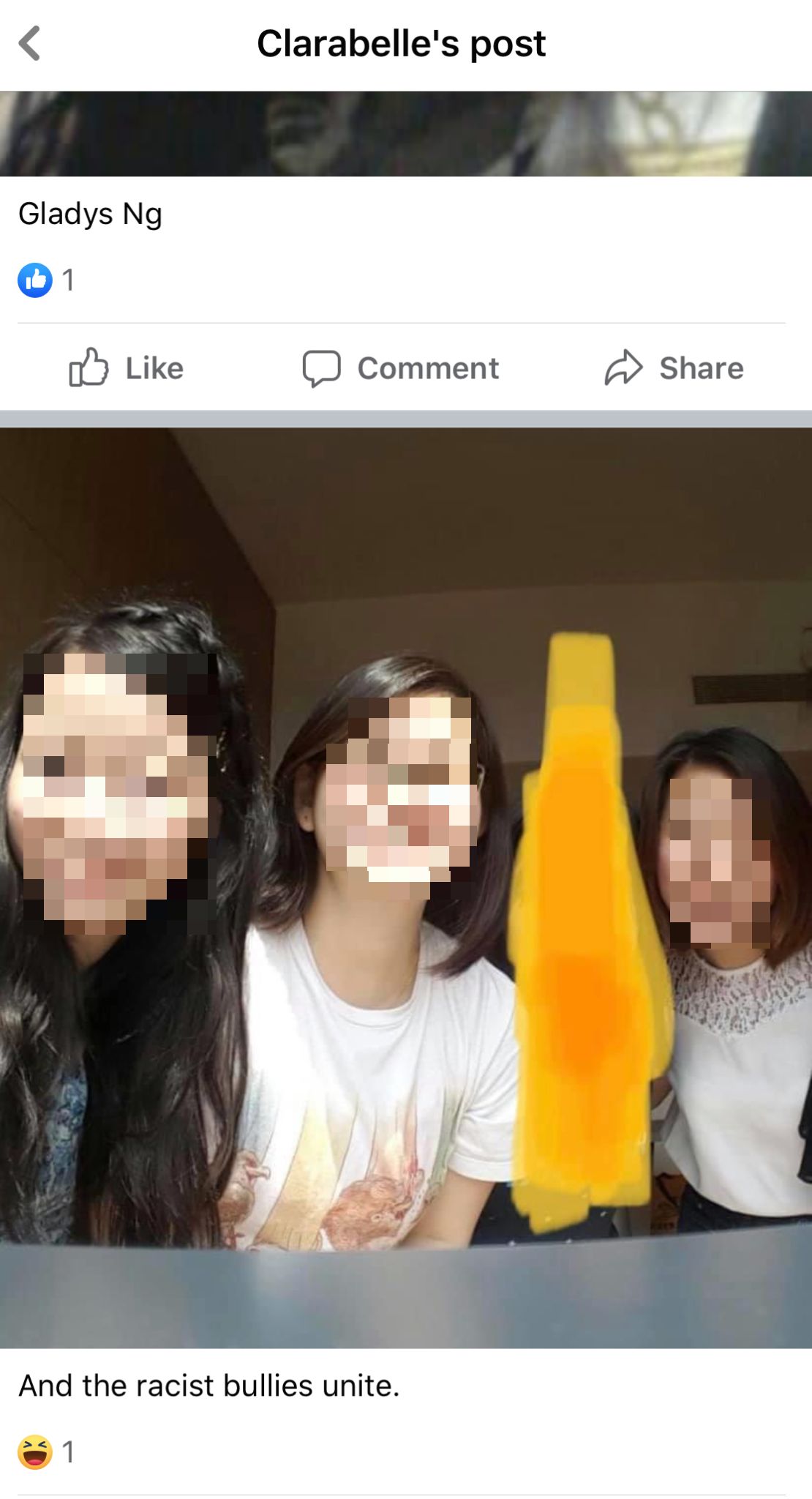 After sharing an incident where she was a victim of racism in Primary school, one Natasha proceeded to experience further cyber-bulling and aggressive comments from three of her other Facebook friends.

In a Facebook post, Natasha shared an incident where she first personally experienced racism. She wrote: “In primary school, my classmate Nic** saw me sitting on her chair and asked someone (In front of me) to exchange chairs with her because my dark skin dirtied it. I carried this thought with me throughout my life till today”.

Within a few hours of posting, the post received over 700 shares and more than 400 reactions.

She added that she does not touch her Chinese friends’ things to avoid such situations, and does not even “hold or play with fair-skinned babies for too long, for fear that their parents would think I dirtied them”. 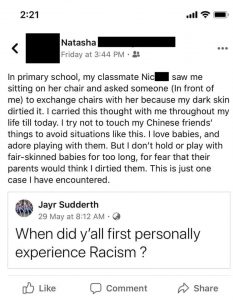 In response, one of her friends on social media named ‘G’ – whose account has since been deactivated – responded saying, “I’m sorry you had to go through that but to see how your response being a literal “An eye for an eye”? Interesting”.

‘G’ continued, “So sharing an encounter requires names to be shared. Got it”. 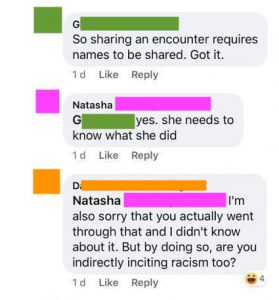 Another one of their friends, ‘D’ joined the conversation. ‘D’ claimed that by Natasha sharing her racist encounter and by naming the racist person, she was “inciting racism”.

‘D’ wrote: “I’m also sorry that you actually went through that and I didn’t know about it. But by doing so, are you indirectly inciting racism too?”

Another person, ‘S’ also called Natasha out for naming her aggressor.

“Shall we then tag her (Nic**) in this post? Drag her out for everyone to see? Possibly destroy her profile? Might as well incite and divide while we are at it?” ‘S’ wrote.

‘S’ continued saying, “Yes, our privilege is showing, and it has been showing”.

‘S’ told Natasha to “think hard about what you really want. Cos there is no wrong in dragging a person out”.

“Would you like me to call her (Nic**) out then? Tag her and drag her out for you? Will I be checking my privilege by aiding you? Or will I be going round in circles and inevitable start something I can’t stop”, ‘S’ said. 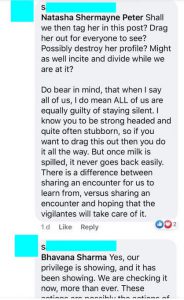 Natasha’s friends defended her against ‘S’, ‘G’ and ‘D’. They wrote: “in a case of assault, does the victim become the aggressor when he/she calls the ACTUAL aggressor out? Ridiculous right?”

Another friend added, “Omg stop trying to threaten her. What even is this????? I don’t understand how you could possibly turn this around to make it about the aggressor. All you’re doing is showing her that she was right to never talk about it”. 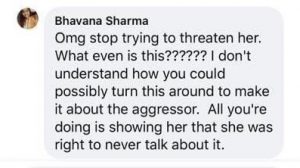 The entire thread was shared publicly by one Clarabelle, who was friends with Natasha, ‘S’, ‘G’ and ‘D’. In her own post, she wrote: “’G’, ‘S’, ‘D’ I am utterly disappointed, disgusted and ashamed that I share my alma mater with all 3 of you. You all should be completely ashamed of ganging up on someone and cyber bullying her while she is literally just sharing an experience that she suffered through”.

“Funny how you would defend your own people in the above comment over a word like ‘yellow’, calling it a racial slur.. when in actual fact that is the colour of the pigment that you carry in your skin. However, you expect Natasha to just understand you didn’t get taught about the harm of racism by your parents or school, whilst she is defending herself from the word ‘DIRTY’”, Clarabelle wrote. 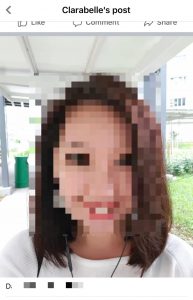 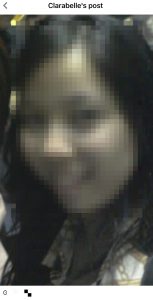 In response to TISG’s queries, Natasha said that the bullies had not apologised to her.
She said: “I want people to understand that the entire point of me reliving my childhood trauma and finding the courage to speak about it on a public platform, was not to incite hatred, but to educate the masses.

Racial and ethnic inequalities are such deep rooted problems within our society which has become so normalised, that it causes such outrage when an individual speak out about their own personal experiences with these issues.

This is not normal. Nobody has the right make you feel ugly, just because you are different. You are beautiful both in the inside and out. Speak out against anyone who dares to tell you otherwise. Be the voice of change you want to see. EVERYONE (regardless of race) needs to play their part to mould our future generation to be free from any from of internalised self-hatred, due to racism.”

Those who commented on the post called out the three girls for their bullying behaviour. TISG has reached out to Clarabelle for comment and clarification.

At the time of writing, ‘S’, ‘D’ and ‘G”s Facebook accounts had been deactivated.

**Name has been changed to protect the identity. /TISGFollow us on Social Media