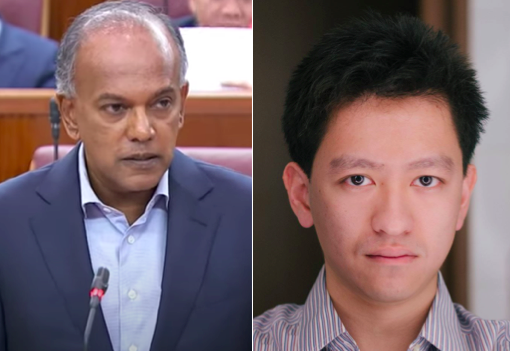 After a high court hearing on Li Shengwu’s prosecution over a private Facebook post, the grandson of Lee Kuan Yew took to social media to update netizens on the status of proceedings.

Mr Li, son of Lee Hsien Yang and nephew of Prime Minister Lee Hsien Loong, wrote in a public Facebook post yesterday (Jul 2) said of the Attorney-General’s Chambers (AGC): “It’s worth noting that the AGC applied to conceal parts of my defence affidavit, with the result that they were not available to the court on 2 July, and cannot be found in the public record”.

“This behavior by the AGC is one reason why I decided not to participate in the proceedings against me”, he added.

Mr Li continued: “Separately, I’d like to quote something that the law minister, K Shanmugam, said in parliament in August 2016: ““…I cannot see how putting up a Facebook post poses a real risk of prejudicing proceedings unless you are the Prime Minister with a million followers and everybody reads what you say.””

The 35-year-old is accused of publishing a private Facebook post with a link to a New York Times editorial titled Censored In Singapore, and a description saying: “Keep in mind, of course, that the Singapore government is very litigious and has a pliant court system”.

The AGC said that the post was published amid the highly publicised dispute over 38 Oxley Road.

The timing of the post ensured that it would capture widespread public attention, and it was “particularly inflammatory as it denounced the court system that Mr Li’s grandfather, Minister Mentor Lee, had safeguarded his entire public life”, said the AGC.

“The post directly contradicted MM Lee’s consistent and spirited defence of the integrity and independence of the Singapore Courts. In fact, Mr Li endorsed – as part of the post – a 2010 article from the New York Times which described MM Lee as the leader of an ‘authoritarian regime’,” wrote AGC.

When Mr Li was told to provide the identities of his Facebook friends, he wrote in another social media post: “My position is this: Who my friends are is none of their business. My friends have a moral right to privacy.”

Mr Li, is an assistant professor of economics at Harvard University and lives in the United States.

Referring to Mr Shanmugam’s remark, and the upcoming General Elections, Mr Li pushed, “Maybe if there were more opposition MPs, the minister would speak more carefully”.

The AGC is pushing for Mr Li to be fined S$15,000 for alleged contempt of court.

AGC’s representatives on Thursday (Jul 2) called for this fine, with two weeks’ jail in lieu if he does not pay the fine, after Mr Li failed to abide by a court order to appear for cross-examination. /TISG