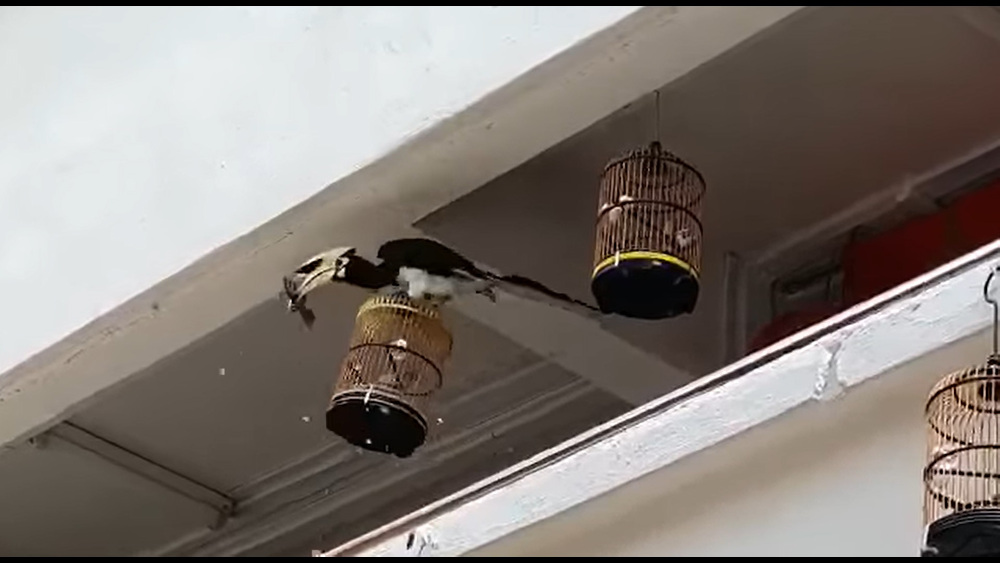 PETALING JAYA — A hornbill in Singapore has been making the rounds on social media after it snatched a small bird from the safety of its cage.

The incident which took place outside an HDB flat was caught on camera shows the large bird perched on a railing near several birdcages.

Spoiled for choice, the hungry hornbill then flies onto one of the cages and violently snatches the little songbird with its large beak in a swift move.

A puff of feathers can then be seen bursting into the air as the helpless bird flaps about in a futile attempt to break free.

A woman can be heard asking, “Where’s the owner?” once the hornbill clutched the songbird in its beak.

The clip which was shared on Facebook received hundreds of comments and was shared 1,400 times.

Many wondered why the person filming the incident didn’t shoo away the hornbill nor alert the owner of the songbirds.

Others were more sympathetic, asking the public not to blame the hornbill as it was just looking for food to survive.

One Facebook user urged Singaporeans to stop criticising the videographer, saying it was the bird owner’s responsibility to keep their pets safe.

“It is important that people understand hornbills can do this,” wrote the user.

“That’s the law of nature, in the estate I lived in, hornbills typically pick young chicks off their nest, if one were to intervene, the hornbill may go hungry and die of starvation,” a second comment read.

“We basically destroyed their house the place where they can find food. Now they seem to be desperate. Still say they have plenty of food? Think again,” another said.

In densely populated Singapore, hornbills live wild and free and have made headlines in recent years, according to the National Parks Board.

The oriental pied hornbill was once almost extinct but has now built up a significant population.

According to Asia One, two hornbills flew into a Pasir Ris flat last December where they stayed for an hour and a half, defecating all over the house before flying away.

In the same month, a man was investigated by the National Parks Board for feeding bananas to hornbills.

Under Singapore’s Wildlife Act, feeding wildlife is an offence that comes with a fine of up to S$5,000 (RM15,400) and S$10,000 for repeat offenders.Follow us on Social Media