There was also understanding online of his plight, with people offering kind words and explanations for what happened It was on that day that the public became aware that he was being moved by the People’s Action Party (PAP) from Tampines GRC to contest in East Coast GRC against a promising Workers’ Party team, which included Ms Nicole Seah. She became famous when she was the youngest candidate in the 2011 elections, contesting with the National Solidarity Party in Marine Parade GRC.

To make matters worse, his team-mate Jessica Tan, who was standing behind him, was spotted with her mask upside down and displaying an inverted PAP logo, raising eyebrows about the cohesiveness of the PAP’s East Coast candidates.

Mr Heng’s speech predictably drew flak from netizens all around, with many taking to the Internet to post memes and make fun of his verbal flub. 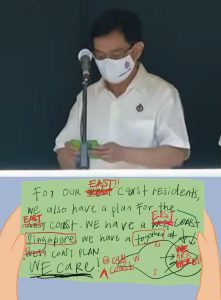 However, there was also understanding online of Mr Heng’s plight, with people offering kind words and explanations for what happened.