Mr Goh also expressed his thankfulness to the medical team that saw him through his treatment, specifically Dr Fong and the radiation therapists

The first word of his post captured his mood.

“Happiness is when you complete your radiation therapy sessions.”

Mr Goh also expressed his thankfulness to the medical team that saw him through his treatment, with a special mention to “Dr Fong and the radiation therapists” who treated him.

“This is the marvellous team who looks after the throat and neck cancer patients at the Radiation Oncology department. There are more in the background whom patients do not see. Thank you all for your care.”

He also posted photos of the staff, with the radiation machine in the background and the custom-made mask that held his face steady while he was undergoing the treatment. Beyond the treatment, it was their cheery attitude that helped him, Mr Goh added.

“Your cheerfulness was infectious. It boosted my morale. Thanks again.” 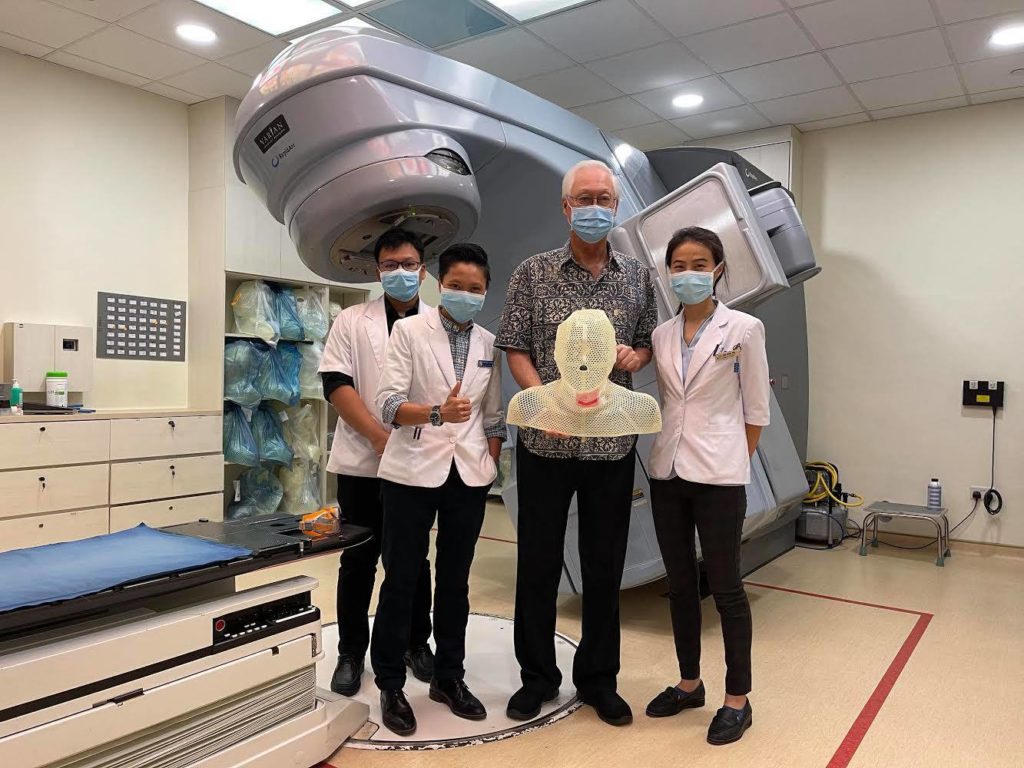 The 79-year-old former Member of Parliament stepped down from the political arena just before the General Election last July.

He began posting about his health issues in late November, in part in order to encourage other Singaporeans to have their regular or yearly health screenings.

And while he wrote in one post that he does not have a subsidised programme for screening for potential illnesses, the Ministry of Health has a subsidised Screen for Life programme available to all Singaporeans.

The early detection of a particular health condition could make a big difference in one’s survival rate, he has stressed.

The former Prime Minister had first gone to hospital in late November to remove a kidney stone, only to return a short while later to biopsy a suspicious nodule in his larynx.

Mr Goh explained that squamous cells had been found in the nodule in his larynx, but, “fortunately, after excision, the MRI of the neck and the CT scan of the chest showed no trace of these bad cells”.

However, he was still required to undergo 20 sessions of radiation therapy, the first of which was held on Dec 23.

Mr Goh added that the effects of the radiation treatments have been mild.

“Other than the muffled, breathy voice and a mild soreness in the throat, I feel fine.”

Still, the former Prime Minister has had some challenging days of late, and he hinted as much when he expressed gratitude for being able to lunch with friends.

“Lunched with friends whom I have not seen for some months. Sure glad to see them. You feel less lonesome.”

Last week, he described his radiation treatment as feeling “like a trapped Spider-Man being zapped by invisible high energy rays.”