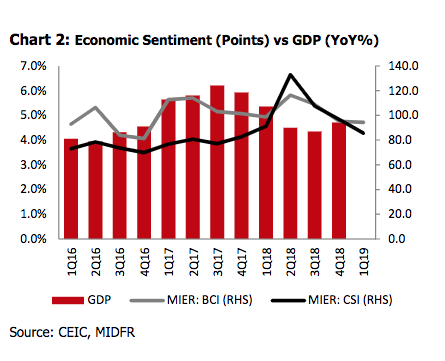 Malaysia Independent Economic Research (MIER) consumer sentiment index (CSI) and business condition index (BCI) is on a downward trajectory and with fading optimism, the gross domestic product growth for 1Q19 will moderate at 4.3%.

The rise in trade tension between the US and China shows how vulnerable Malaysia’s economy is to external factors. The country’s currency is also faltering, falling to 4.1707 today against the USD.

Bloomberg largely blames the current FDI outflow from Malaysia on fading hopes for reform from Prime Minister Tun Dr Mahathir Mohamad’s administration, adding that portfolio managers do not expect to run back to Malaysia soon.

It says investors are losing patience and global funds are bypassing the country in favour of other markets.

But Dr Mahathir’s government is altogether not in a hurry to fix the market outflow as it has set its own pace for reforms.

Its priority in its first year in power was to fight corruption which bogged down the government apparatus while the freezing of mega projects built on the suspicion of flawed business foundations impacted the corporate profit. This did not give the right signal to investors.

Dr Mahathir has since restarted some of these projects, including the East Coast Railway Link with massive cost cutting saving billions of dollars of taxpayers’ money and reviving the Bandar Malaysia project.

“On a positive note, trade surplus widened to 9-year high at RM36.9 billion.”

Malaysia’s KLCI briefly fell below 1,600 points yesterday and today. The local bourse opened with a 30 points drop today but rebounded back above 1,600.90. It is still on a losing streak (-0.19).

MIDF believes the rising trade tension between the US and China would impede the progression of global growth and trade flows and remain a downside risks to export-oriented countries including Malaysia.

The research house says it forecast GDP growth for 1Q19 at 4.3%, predicting economic activities to continue expanding at a moderate pace amid resilient domestic spending and tepid external trade performances.