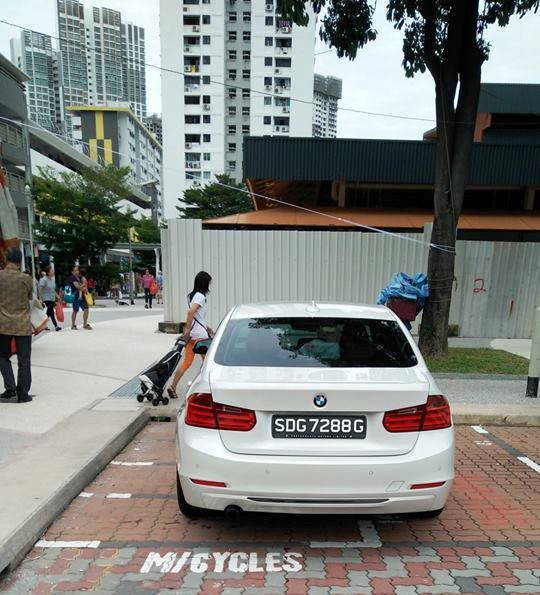 A Facebooker and motorcyclist, Carine Yeo, saw a man park his car, a BMW, in the spaces clearly marked out for motorcycles. Thinking that he might have been mistaken, Ms Yeo asked him if he knew he was parking over the motorcycle lots.
To which the the driver, a skinny bespectacled Chinese man in his late fifties, retorted in challenging tone that Mrs Yeo shouldn’t bother as she had her own space. He locked his car and walked away.
But on seeing Ms Yeo taking a picture of his BMW parked wrongly, he returned to confront her. Ms Yeo told him that he should not be worried as he had done nothing wrong. The bespectacled man responded to this by declaring that he is a civil servant and continued to take pictures of his own of Ms Yeo and her Vespa.
“Do you know who I am?! You don’t know who you are messing with! You are playing with your arse!”, the man allegedly said to Ms Yeo.
This enraged Ms Yeo as she was a former civil servant herself, and she decided to shame the BMW driver on her Facebook.
Throughout the argument, the ‘civil servant’ kept saying that he was “not parking, not parking”, to which Ms Yeo pointed out the red painted words on the ground to him – ‘NO PARKING’.
“If you didn’t do anything wrong, why did you hastily drive away then?”, Ms Yeo asked the driver in her Facebook.
“Mr All-Important-Civil-Servant, you are a disgrace to the public administration. I humbly suggest you use your Skillsfuture credits for a parking refresher course. Or basic etiquette. Or language improvement,” she wrote.
The incident happened at the carpark opposite Ghim Moh market (20 Ghim Moh Road). Ms Yeo has since reported the errant motorist to the Land Transport Authority. Her post has been shared over 2400 times and has gone viral.

**Update: Errant parking offence has been reported via onemotoring. It's over to LTA now. Thanks everyone who pm-ed me…