The incident captured on video saw one of the officers in one smooth, swift movement, flicking the man’s mask upward so that it properly covers his mouth and nose

Singapore—SG Dirty Fella is a Facebook page intended to “showcase the unhygienic acts, behaviours that promote the spreading of infectious diseases by people living in Singapore.”

Nowadays, it often posts photos and videos of people who go out in public without masks.

But on September 8, a video showing an officer at Certis Cisco putting the mask of an angry patron in place drew positive reactions from netizens.

Two men got into a fight at Tekka Centre on Sunday afternoon (Sept 6). Good thing that a number of Certis Cisco officers were on hand to calm things down.

Part of the altercation was caught on video and posted on SG Dirty Fella.

In the one-minute-long video, a man in a white t-shirt, with his mask pulled down around his chin can be seen arguing with and striking a man in a black t-shirt, who happened to not wear a mask at all.

The officers come on the scene and break up the arguing duo before any serious harm can be done.

At around the 12-second mark, one of the officers in front of the man in the white shirt, in one smooth, swift movement, flicks the man’s mask upward so that it properly covers his mouth and nose.

The man in the white shirt momentarily adjusts his mask, but goes on arguing with the officers.

He puts his mask down to his chin again at one point, for just a second, and this time, he puts it back properly himself.

Seconds later, however, his mask falls again below his nose, but he just keeps on arguing with the officers. Whether or not they fix it on his face again is unknown.

Netizens were quick to notice that the officer had adjusted the mask of the patron, who is quite a bit taller, in addition to being angry, and they praised the Certis Cisco officer. 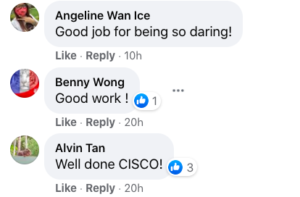 Read also: Uncle being told to wear mask in public says ‘mask no need to use money to buy ah’