Bread and butter matters most in Malaysia’s upcoming polls

Bread and butter issues will matter most in the upcoming Malaysian polls, said a Hong Based newspaper and this might serve as a guide on what the regime headed by the Prime Minister Najib Razak might be up to.

This is how easy it will be for the regime in place to win support, that is by handing out cash and promising the government will take care of their needs.

In the meantime, the opposition will be harping about the national issues that are of less interest to the core voters, that is the Malay voters.

But Najib, said South China Morning Post, is now empowered by a National Security Council Act of 2016 that has given him as well as the deputy prime minister the right to declare an emergency in the event of any life-threatening situation on the ground that is potentially caused by the attack of the Islamic State in Malaysia.

Maybe SCMP is suggesting that Najib might use this in the event his plans to secure a majority of Malaysian voters support fails with the bread and butter strategy?

Next, the paper said much about the BN strategy will be how the people accept the fact that Najib’s wife is the person with the most power in her hands.

It is about the economy, stupid – GST Woes?

SCMP said economically, this is also the first election where Malaysia’s fiscal condition is in the red, after the mismanagement of nearly US$11 billion in and through 1Malaysia Development Bhd (1MDB).

The election – a date has not yet been set but it will be before August 2018 – will be a litmus test on the popularity of the goods and services tax which stands at 6 per cent.

The Malaysian government, having dabbled in numerous corruption scandals ranging from the National Feedlot (NFC), to Port Klang Free Trade Zone (PKFZ), 1MDB and Felda Global FGV, is about to get its first verdict from the voters.

The paper said there will be four million youth voters who still have time to register. If the youth votes swing completely to the opposition, the government of Najib will be in a death spiral.

But there the Umno may still get the edge since it can depend on its three million members, though only 1 million are active card-carrying members.

“If they cannot mobilise the rest, the inert Umno members could find themselves overwhelmed by the youth vote.”

ore ominously, this is the first election where the top issues are almost all centred on the economy, ranging from corruption cases in the 1MDB scandal to the increased cost of living that has affected rural and semi-rural constituencies.

Race, religion and the place of royalty still matters, but are only secondary concerns compared to the pressing issues of dollars and cents. In such a political atmosphere, any further dip in the Malaysian economy will generate a swing to the opposition. 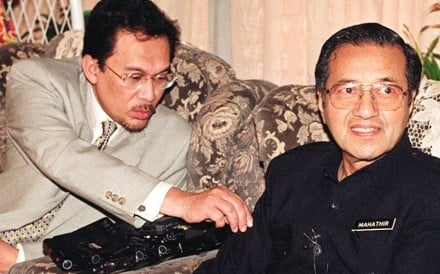 It has been more than 60 years since the Malaysian opposition has held power. But with the experience of Mahathir, Anwar, Muyiddin and Mukhriz in finance and trade, the time for change may be near, said the paper.