27 year old Yeo Liang Wei, who is accused of having molested an unnamed woman shortly before midnight on September 14, was brought back to Tampines Street, the alleged scene of the crime, by authorities yesterday.

The logistics executive was charged in court the next day with one count of molestation. If found guilty he could go to jail for as long as two years, be made to pay a fine, or be caned.

Police are still investigating the alleged molestation, and Mr. Yeo is scheduled to return to court on Friday, September 21.

His victim is a 33 year old female insurance agent who was walking from Tampines MRT Station to her home at Tampines Street 21, at 11:55 that night. Mr. Yeo is supposed to have run up to her from behind and touched her right breast, and then ran away.

Mr. Yeo ran to Block 230F, Tampines Street 24, supposedly his residnece, and went up the stairs. But by 12:13 am on September , police had arrived and subsequently arrested him on the third floor of the building.

This morning, (Wednesday, September 19), he was led by authorities to the footpath along Tampines Street, and then towards Block 259, Tampines Street 21.

Netizens are naturally concerned about safety 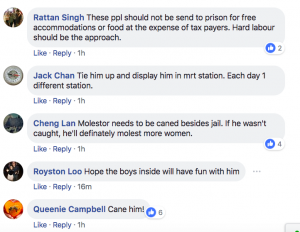 Another netizen commented that one moment of losing self-control could have grave consequences indeed, and that people must think of their futures