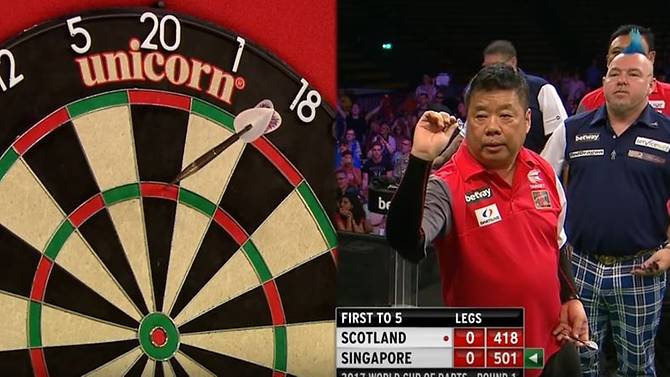 THE oldest darter at the World Cup 2017 hails from Singapore. He may look overweight, like an over-the-hills player at 63. Some may well have laughed at Paul Lim Leong Hwa.

But when he started delivering the darts in the opening match against No 1 seed Scotland, the world of darts gasped in disbelief.

Simply because the Singapore pair of Paul Lim and Harith Lim turned the tables and sent tsunami-like global signals with a rip-roaring message: Never ever underestimate an old professional in age alone.

If first impressions count, Paul would probably be acquainted to anyone sitting solo and polishing the bottle by the bar. He hardly looks like a sportsman and his sagging eyes reflect his consistent lack of sleep and rest.

But when the darts start flying, he usually proves the critics wrong, with the dexterity of a marksman, the nibble fingers of an archer and the finesse of a sniper as he stunned the crowd at the World Cup of Darts held in Frankfurt, Germany, with an immaculate performance.

In the opening fixture, plenty of jaws dropped when the Lim pair shocked world No 2 and No 3, Gary Anderson and Peter Wright, with a 5-2 win in the best-of-nine-legs doubles round.

On paper, the Lims, who are not related, are virtually unknown in the world of darts.  They are not on the Professional Darts Corporation world rankings but, according to Darts Database, Paul is ranked 451st, while Harith is 879th.

But the “Majullah Singapura” pride is always at stake and coughing out from their own pockets, they have represented Singapore in this competition every year since it became a fully knock-out tournament in 2014.

The Lim pair went on to beat Spain, another Europe powerhouse, 2-1. But they were eliminated in the quarter-finals in a narrow 2-1 loss to Belgium, who were beaten finalists in 2013 and semi-finalists in the last two years.

For the record, the last eight is the furthest Singapore have progressed in the competition and the duo will bank £14,000 (S$24,930) for their effort.

For Paul, who carries the nickname “Singapore Sling”, it’s a sensational feel: “I tell you what, this is the moment…it’s not representing yourself, but it’s for your country. This is a dream come true.”

Harith Lim, 47, who won the World Youth Masters in 1986, when he was only 15, added: “This is a massive moment for Singapore, it’s a great win. When we saw the draw we were just happy to play against two of the best players in the world.”

Paul’s rise in global darts is a classic case of a rags-to-riches tale. A former military policeman and a former chef, he served his National Service in the Singapore army between the ages of 18 to 21. He came to Britain to seek a City and Guilds qualification course in cookery, studying at Battersea and Westminster Colleges in London and undertaking his first role as a chef at the Chelsea Hotel in Knightsbridge.

When he was in Britain studying, he was introduced to the game of darts at the Robin Hood pub near Gunnersbury Station. He settled in San Bernardino, California and married Janet. They have two sons, Christopher and Michael. Christopher also plays darts at a competitive level, while Michael is an accomplished swimmer, under the direction of Derik Moon, his head coach.

Primarily based in Hong Kong nowadays, Paul, who was once ranked world No 9 in 1990, was the first player to hit a perfect 9-dart finish during the Embassy World Darts Championship, which he achieved in 1990 during his second round match against Jack McKenna.

Significantly, Paul represented three countries at darts. Singapore was not affiliated with the sport’s governing body, the World Darts Federation (WDF), so he played briefly for Papua New Guinea, but settled in California and represented the United States in international competition, before also playing for his native country when they became a WDF playing nation.
This week at the World Cup of Darts held in Frankfurt, Germany, he proved what an “orang tua” can do on the global stage and make a little red-dot island scream with sporting joy.Follow us on Social Media