“Then after being rightly told off by Law Minister Shanmugam, and police investigation into their video, these 2 made a “mocked, insincere apology”. Would Leopards change it’s spots?

“MHA should send a clear message to Leftist activists like them to stop playing the race and victim card, and using IDENTITY politics to incite disharmony.” 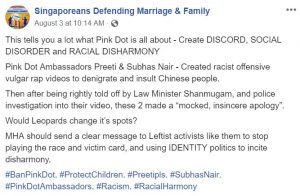 Interestingly, just last year the administrators of SDMF sought forgiveness from members of the LGBT community for possibly hurting or offending them with their “unhelpful and often insensitive” remarks.

SDMF made a “sincere” apology to those “struggling with same-sex attraction”. Adding that it is yearning to “learn and grow to be able to walk with you more effectively in your journey,” the group wrote:

“We are deeply sorry. We have much to learn. We need and want to learn and grow to be able to walk with you more effectively in your journey..

Curiously, just a day before publishing this apology, SDMF wrote in a separate post:

“If we really care about the LGBT community, we should realise that homosexuality was a psychological disorder in APA’s DSM before LGBT activists politically manipulated APA to have it removed in 1973 and it was never based on conclusive scientific research…

To put it in SDMF’s own terms, would a leopard change its spots?

This tells you a lot what Pink Dot is all about – Create DISCORD, SOCIAL DISORDER and RACIAL DISHARMONYPink Dot…