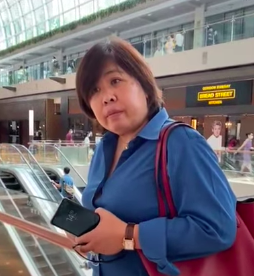 Singapore — Phoon Chiu Yoke, or the woman now also known as “Badge Lady”, appeared in court again on Tuesday (June 15) regarding charges she faces for not wearing a mask on various occasions.

She asked for her charges to be dropped and cited “immunity as a citizen” and added that she was an ex- Singapore Armed Forces (SAF) officer.

Phoon, 53, was released on S$8,000 bail on June 9 after she was remanded at the Institute of Mental Health (IMH) for two weeks.

She added that she was involved as an “ex-plaintiff” and as a witness to unspecified cases in the SAF and she could not face her current case in a public court without “prejudice” and causing embarrassment to the SAF and the Government of Singapore.

Phoon, who was unrepresented, told District Judge Janet Wang: “I’m applying for all these charges to be dropped. I was an ex-naval officer in the SAF … I was an ex-plaintiff to cases and an eyewitness, it’s not possible for me to have a fair hearing because of all these cases previously.”

Judge Wang told her she might want to seek legal advice and adjourned the case to July. Phoon remains out on bail of S$8,000.

Phoon currently faces seven charges, six of which are for failing to wear a mask in public in breach of Covid-19 laws.

During her appearance in court on May 24, Phoon walked in without a mask on. However, after seeing press photographers, she hooked a mask over one ear. A security guard then told her to put the mask on properly and she complied.

Before District Judge A Sangeetha, Phoon stood in the dock and tried to take off the mask but was cautioned by the judge.

When leaving the State Courts, Phoon took off her mask and smiled at the photographers as she walked towards a pickup point.

Paramjeet Kaur, 41, the “sovereign lady” who made headlines last year, was sentenced to two weeks’ jail and a S$2,000 fine on May 7. She pleaded guilty to one charge each for failing to wear a mask over her nose and mouth while she was outside her residence, and for public nuisance.

Five other charges were taken into consideration by District Judge Ronald Gwee during sentencing.  Three of these were for breaching Covid-19 regulations.

During the first few weeks of the circuit breaker last year, Kaur challenged the police by taking a video of them after they stopped her for not wearing a mask to the market.

She argued, “I am a sovereign,” and claimed that the law did not apply to her.

After this, she was arrested and fined. On May 3  she was filmed again, arguing with the people around her regarding the law.

“Read the law,” she can be heard saying to someone in a video that went viral.

She added that she was previously confronted by the police and claimed that she had got away scot-free.

“I’ll show you a video of the police here, same thing, trying to stop me and then walked off, without a warning, without a fine,” she said, once again claiming her sovereignty.

Four of the charges were for breaching Covid-19 regulations. One was for being a public nuisance and the final one for failing to report the change in her home address. /TISG

Read related:‘Badge Lady’ asks that charges against her be dropped, claims there were ‘errors’ in the investigation