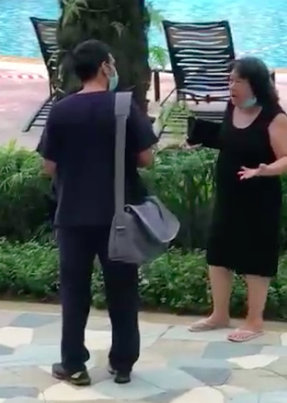 Singapore — A woman refusing to wear a mask at a condominium shouted at and abused a doctor who asked her to put one on.

In a video circulated on Sunday (June 13) on WhatsApp Messenger, a maskless woman who was walking by a pool was seen shouting at a man in blue scrubs.

The clip seemed to have been taken at Summerhill condominium in Clementi. It started off with the woman talking about Hinduism. While it is unclear what  she was saying at the beginning, she could be heard shouting, “Wrong religion, wrong religion.”

When the man in scrubs — apparently, a doctor — tried to talk to her, she asked: “Are you from the Government?”

He could be seen shaking his head, causing her to reply: “He’s not from the Government, go to hell!”

It seemed that the doctor was trying to give her advice. The woman repeatedly shouted: “I don’t take free advice. What are you doing? Get lost! Get lost!”

“You stupid doctor,” she could be heard telling the man.

At one point during the incident, the woman asked the doctor for his ID. When he showed it to her but refused to hand it over, she pointed out, “No barcode,” and started to walk off.

The person filming the video could be heard saying that the woman did not want to wear her mask.

Phoon Chiu Yoke, or the original “Badge Lady” as she is called by netizens, was infamously caught on camera refusing to wear a face mask, despite being asked to do so by safe distancing ambassadors.

Phoon was spotted repeatedly asking for the safe distancing ambassadors’ badges as they advised her to wear a mask while queueing at Marina Bay Sands.

“If you have no badge, why are you asking me to do something?” she was heard saying. “Who are you representing?” she asked. /TISG

Read related: ‘Badge Lady’ asks that charges against her be dropped, claims there were ‘errors’ in the investigation