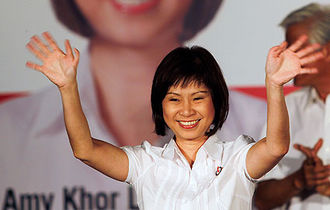 Senior Minister of State for the Environment and Water Resources, Dr Amy Khor’s comments on the petition to relocate the Sungei Road Market in Parliament on Monday have been criticised as deeply disappointing by the organisers of the petition.

Citing that the Government has not addressed issues such as financial destitution elderly vendors may be thrust into as a result of the closure of the market, the two groups – the Association of the Recycling of Second Hand Goods and the Save Sungei Road Market Campaign – delivered a joint statement today, claiming that none of the assistance options the National Environmental Agency presented to the vendors are “practical or sustainable.”

They also criticised the National Heritage Board’s plans to digitise the market as a documented memory, one that “fails to create the lived experience of our last remaining living street culture.”

Questioning the consistency of figures Dr Khor released in Parliament and the declaration that vendors have been engaged successfully by the government, the organisations reported that according to their surveys, only certain groups of vendors were consulted by the government while others who only operate in late afternoons or during weekends were left out.

“This leaves SMS Khor’s point about the “deep engagement” the Government is supposedly to have performed open to question.”

They also wrote, “More disturbingly, SMS Khor in her answer to a supplementary question, referred to a man (“Tan Khoon Yuan”) who claims to be the vice-president of the Association of the Recycling of Second Hand Goods, as one of the vendors who has taken up a hawker stall. Mr. Koh, Chairman of the Association, verified that there is no such position as a Vice-President and he does not know any person by this name who is involved with the Association.”

”It is clear thus far that the officials and agencies involved are not accurately informed and appraised of the ground situation and sentiments of the vendors, many of whom are from the pioneer generation. The Government should respect the autonomy of these vendors to decide for themselves on what and how best they want to carry on their trade as a means of livelihood, social engagement and active aging.”

Alleging that the Government has also not discussed the matter with representatives of the movement, the two groups added that many alternative proposals for Sungei Road Market that have been submitted to the authorities have only been met with “generic replies.”

Preserve the history of Sungei Road Market through collective relocation

The organisers reiterated their main call to collectively relocate the market so as to preserve the “unique branding and history of the Sungei Road Market. Dispersing them to hawker centres effectively causes the vendors to lose the ‘cluster effect’ of having many businesses from the same industry together in close proximity.”

They also call for NEA to meet with those involved with the Market in person “so as to have a constructive discussion on the impact of the closure of SRM and prospects of relocating the Sungei Road Market. It is not too late.”