Alleged colleague of Ramesh Erramalli speaks out, says latter “is a person with a big ego” who is “paid like a king”

In an anonymous social media post, a person claiming to be a colleague of Ramesh Erramalli, the condominium owner who abused a security guard, spoke out, describing the latter as “a person with a big ego”.

The colleague, who wrote in to Facebook page ‘SG Confessions’ anonymously, said that he initially wanted to wait until JP Morgan, Ramesh’s company, made a public statement before speaking up but added that the investment bank was slow to act. By way of explanation, he wrote, “why you say, just look at his (Ramesh’s) position and you will know why the hesitance to take swift decisive action”.

The colleague wrote that “Ramesh is a person with a big ego, he likes to talk big, why? Because he is paid like a king, opens his mouth to direct others while the staff does his bidding.

He has power and authority issues and yes always gives the vibe that he looks down on his colleagues and subordinates. I guess in his mind, he is God’s gift to this world and Singapore”.

“He is the Singappre dream come true, a rag to riches immigrant story. He views money as the barometer of success, respect can be thrown out of the window”, the anonymous post read. 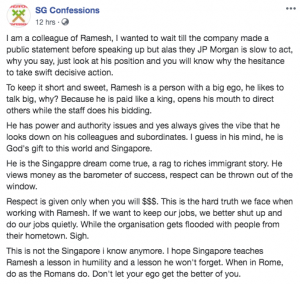 Ramesh’s alleged colleague also said that he hopes Singapore teaches Ramesh “a lesson in humility and a lesson he won’t forget”.