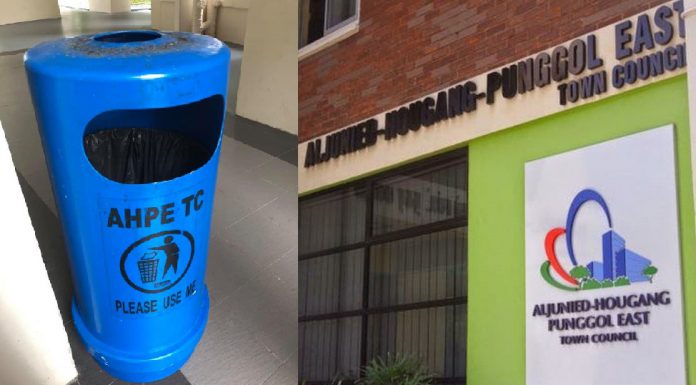 New Sengkang GRC Member of Parliament (MP) He Ting Ru shared a photo on social media that showed a rubbish bin in Buangkok bearing the name of the old Aljunied-Hougang-Punggol East Town Council (AHPETC), years after the Workers’ Party (WP) town council was renamed after it lost Punggol East SMC.

The WP, which has held Hougang SMC since 1991, created the Aljunied-Hougang Town Council (AHTC) after it won Aljunied GRC in the 2011 general election. A year after the election, in 2012, the Punggol East SMC seat in Parliament became vacant after People’s Action Party (PAP) MP and Speaker of Parliament Michael Palmer resigned due to an extramarital affair.

The WP had contested Punggol East SMC in the 2011 election, in which its candidate Lee Li Lian garnered an impressive 41.01 per cent of votes – a remarkable feat for a fresh face standing in a single member ward.

In the ensuing by-election, Ms Lee was picked as the WP’s choice to contest the ward and she faced a rare four-cornered contest, with new PAP candidate Koh Poh Koon – a colorectal surgeon who had just joined the PAP three months prior – and two other opposition parties joining the fray.

The WP included Punggol East in its town council and formed AHPETC.

Ms Lee was fielded to defend her seat in the 2015 General Election, which was held months after Singapore’s founding Prime Minister Lee Kuan Yew passed. The PAP fielded six-term MP and Deputy Speaker of Parliament Charles Chong in Ms Lee’s ward and the WP was narrowly defeated with 48.24 per cent of the vote compared to the PAP’s 51.76 per cent.

The hotly contested Punggol East SMC ceased to exist by the time the 2020 General Election was called. Instead, a new multi-member ward – that included what was formerly Punggol East SMC, Sengkang West SMC, and parts of Pasir Ris-Punggol GRC – was formed and named Sengkang GRC.

Sengkang GRC was contested by three fresh faces from the WP – Raeesah Khan, Jamus Lim, and Louis Chua – and one candidate who had run in one previous election, He Ting Ru. The WP team faced off with the ruling People’s Action Party (PAP) team that included three prominent political office-holders and one new candidate.

The WP team pulled off what seemed like an impossible feat when it emerged the victor at the polls, ousting Minister in the Prime Minister’s Office and labour chief Ng Chee Meng, Senior Minister of State Lam Pin Min and beloved grassroots MP Amrin Amin from Parliament.

In a Facebook post published on Monday (3 Aug), He Ting Ru shared that a rubbish bin in Buangkok still bears the AHPETC name. The new MP indicated that she came across the bin while she was meeting residents and conducting her ‘mobile MPS’ in Buangkok:

We’ve been meeting residents and conducting our ‘mobile MPS’ in Buangkok. Grateful to have Ron Tan Jun Yen 陈俊元 and a committed team to walk with us.#sengkanggrc