The Independent News
Home News After cyclist falls into drain when dogs run toward him, commenters say...

After cyclist falls into drain when dogs run toward him, commenters say dogs are not to blame

Dogs will be dogs, bicyclists were not riding in a straight line, say netizens

Singapore— Fellow feeling was sorely lacking for two men who fell off their bicycles when dogs barked and ran towards them at the dead of night. The dogs were not to blame, concurred netizens who saw the video. Some went so far as to blame the men.

On Friday (Feb 19), crowdsourced news site Stomp shared a video of the misadventure of the two cyclists on Shipyard Road.

The incident on Feb 15 (Monday) occurred just before midnight, the timestamp on the video says.

In the 26-second long video, the men are first seen riding their bikes on the left side of the road, and can be heard talking.

“Lower down the speaker,” one man tells the other, “these dogs they chase.”

They then move to the right side of road as some dogs run towards them, barking.

The man who spoke then cries out to his companion to stop.

One man then disappears from the frame, having fallen into the drain at the right side of the road.

The other falls off his bike.

As quickly as the dogs had appeared, they run away.

The man who had fallen off his bicycle appeared to be looking around for his companion as he remounted his bike.

The article had referred to the dogs as “wild dogs” in the title and in the body of the report, which added that the man who had fallen into the drain was later taken to hospital.

Stomp quotes the Singapore Civil Defence Force as saying that they got a call for assistance around midnight on Feb 16 along Shipyard Road near No 49 Shipyard Road.

“Upon SCDF’s arrival, a person was found in a drain.

“SCDF used a stretcher to rescue the person and conveyed the person to Ng Teng Fong Hospital.”

Surprisingly, netizens who commented on Stomp’s Facebook post defended the animals, saying they were not to blame for the mishap.

Some popular comments actually thanked the dogs “for getting rid of pests on roads” and advocated for a dogs’ rights group. Another seemed to blame the cyclists for not riding in a straight line.

The most liked comment called the article “misleading,” because the “Cyclist fell into drain due to his own carelessness.”

Others chimed in that the dogs are not aggressive and do not attack unless provoked. 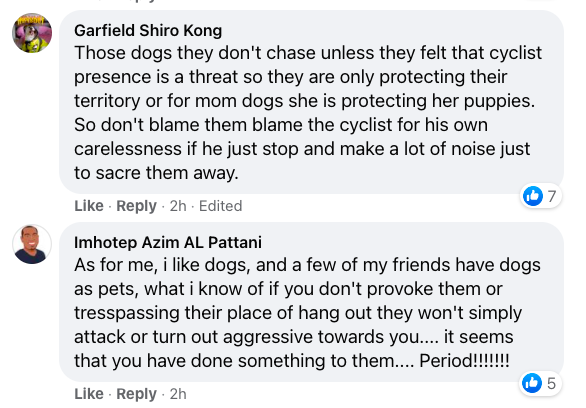 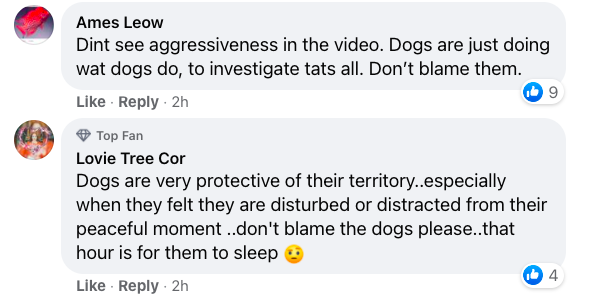 Still others said that the dogs were merely doing what dogs do.