The Independent News
International Business & Economy A company complains against EDB for giving special treatments to another in... 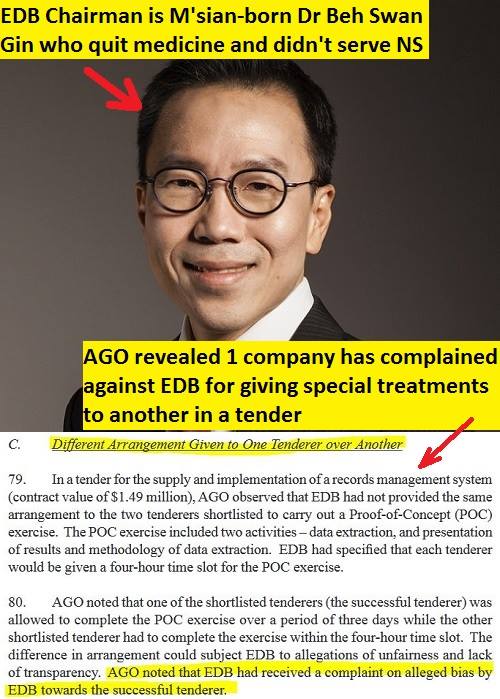 The Auditor General’s Office (AGO) released its government audit findings to the public yesterday (18 Jul). the report said that a company had complained against EDB for alleged bias towards another IT company.

EDB put up a tender worth $1.49 million for the supply and implementation of a records management system. The company which won the tender was said to be given special treatment by EDB.

AGO said that EDB had not provided the same arrangement to the two tenderers shortlisted to carry out a Proof-of-Concept (POC) exercise, which included data extraction, and presentation of results and methodology of data extraction.

EDB had specified that each tenderer would be given a 4-hour time slot for the POC exercise. As it turned out, one of the shortlisted tenderers, the alleged “favoured” one, was allowed to complete the exercise over a period of 3 days while the losing tenderer had to complete it within the 4-hour time slot.

“The difference in arrangement could subject EDB to allegations of unfairness and lack of transparency,” AGO noted. Indeed, the losing tenderer then made a complaint against EDB on alleged bias by EDB towards the successful tenderer.

EDB explained that both tenderers were given the same amount of time and access to the IT system for data extraction. But AGO countered that while EDB’s original intent was for the exercise to be completed within a four-hour time slot, EDB had accepted the successful tenderer’s proposal to reschedule its data extraction to an earlier date and present the results and methodology of the data extraction 2 days later. This, in effect, gave the successful tenderer 2 full days to prepare its presentation.

“The outcome was that EDB had allowed a different arrangement for the successful tenderer,” AGO remarked.

“EDB could have avoided the risk of being perceived to be favouring a certain tenderer by adopting a consistent approach of requiring tenderers to carry out the POC exercise within a four-hour time slot on the same day as specified in EDB’s email invitation.”

The Chairman of EDB is Dr Beh Swan Gin who was born in Malaysia. Last year, at an EDB-ST forum on Singapore’s future, he urged Singaporeans to consider growing the Singaporean core by welcoming anyone who “wants to call Singapore home”. He said, “ourselves, our parents, our grandparents, we were foreigners also at one time. That’s our heritage.”

In an article he wrote for a RI Alumni Magazine in 2011, he said he was very keen to come to Singapore because he wanted to have a “better educational prospects”. He came to Singapore at the age of 12.

“It is rather hard to believe that I thought about such matters even before I became a teenager,” he wrote. In other words, Dr Beh thought that he was already very matured and clever at the age 12.

With a good ‘O’-level results, he later entered RJC in 1985. After his ‘A’-levels, he got into the competitive medicine faculty to study as a doctor in 1987 and later graduated in 1991.

However, despite getting into the heavily state-sponsored medicine course which is much treasured by many Singaporean students, Dr Beh realised that he didn’t want to become a doctor. He said, “Along the way, I figured that while I enjoyed studying Medicine, practising Medicine wasn’t how I wanted to live the rest of my life.”

“On hindsight, I think I was able to make such a drastic career choice because of the confidence that came along with the opportunity of being a student leader,” he added.

After his 1-year medicine housemanship, he quit becoming a doctor immediately to join EDB in 1992. He did not need to serve NS.

While Dr Beh has the luxury to study medicine and even quit to become a doctor after his studies, many other Singaporean families have to spend hundreds of thousands of dollars to sponsor their children to study medicine overseas because they can’t get into the heavily state-sponsored medicine course in NUS.

Indeed, EDB Chairman is quite a lucky guy to be well-taken care of by the Singapore government. It’s not known if Dr Beh knew about the complaint against his organization for the alleged favoritism towards the successful tenderer, as revealed by AGO.