$30,000 raised for woman in Beach Road attack, $500 cash reward for all heroes who stood up to protect & save woman 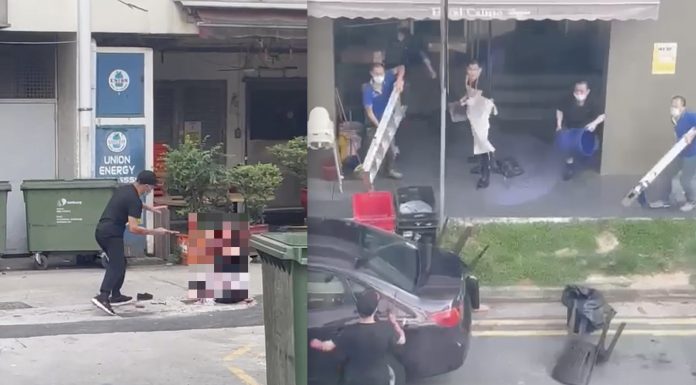 About $30,000 has been raised to help the woman who remains in the hospital and will need more surgery. The donors also want to reward the heroes who stood up for the woman. Additionally, the police have publicly commended all the heroes involved as well. Great job! 👍🏻

News reports on April 19 said that nearly $30,000 had been raised for the injured woman who was attacked with a chopper and knives outside the Beach Road Hotpot Restaurant recently.

Though she is out of danger and has recovered sufficiently to allow her to be moved out of intensive care, she will still need further surgery.

Graphic videos of a man using a chopper, and two other knives, to slash the woman believed to be his wife went viral on social media last week. In several videos posted online, the man was seen assaulting her with a kitchen knife in an alley.

The shocking attack is said to have caused severe injuries to her neck and head. While covered in blood and with her left hand almost severed, she was taken to Tan Tock Seng Hospital. The savagery of the attack and the severity of her injuries have attracted much attention.

Her employer said later on that he went to the hospital to see her and that her condition, although serious, had improved. Several businesses have raised funds for the wounded woman, and the public has also raised money to help her.

The donors said in an earlier interview that they also wanted to reward the heroes who stood up to save and protect the life of the woman. So far, only one member of the public has come forward to accept the $500 reward offered.

The donors said that if the other people who helped her do not come forward, they will hand over the remaining money to the victim directly, or through her employer.

The police have publicly commended the people who had intervened to prevent the man from causing further harm to the woman.

The man was charged in court on Apr 16  with attempted murder under Section 307 of the Penal Code. If convicted, he faces as much as 20 years’ jail and a fine, or even life imprisonment.

Assistant Commissioner of Police (AC) Jeremy Ang, Commander of the Central Police Division, said: “The Police are aware of videos circulating online of the incident and would like to urge members of the public to refrain from circulating the videos and speculating on the case.”

The post Woman injured in Beach Road stabbing case has been transferred out of ICU appeared first on The Independent News.