He was live-streaming when he saw the attack, assailant fled and he called the police

Singapore—An attempt to rob a Singaporean student of his bike was thwarted when a YouTuber, who happened to be live-streaming at that time, stopped the assailant in his tracks.

Furthermore, the YouTuber, a British man who goes by the name Sherwin, helped 21-year-old Raymond Hing call the police after the attack left him with a bloody gash on his face.

The incident occurred when Sherwin was live-streaming himself going on a walk one night in Central London earlier this month (Apr 10).

At one point—six hours into his live stream—he asks a passer-by for some directions, as he was looking at Google Maps for a specific point where he was to get a ride.

While he was talking to the passer-by, screams were suddenly heard.

Sherwin is then seen running towards where the screams are coming from. 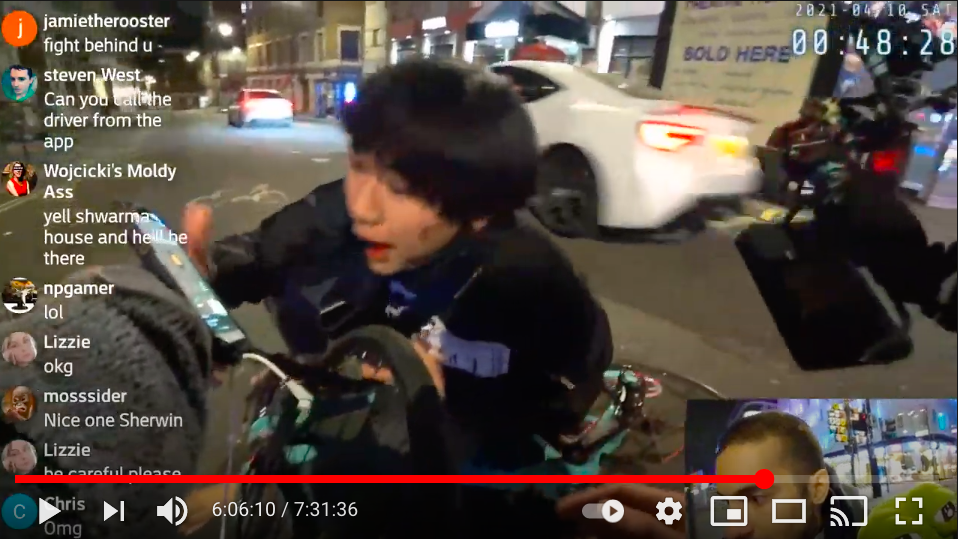 He came upon Mr Hing sitting in what appeared to be the middle of a road clutching his bicycle, with another man nearby. The student said, “Call the police!”

But the assailant, a young African man, made a further attempt to take Mr Hing’s bike. The assailant’s face is clearly seen on his video. The YouTuber’s live stream caught the attacker walking, and then running away.

Others come by to help as Sherwin used his mobile phone to call the police.

When he got through, Mr Hing told them that he “almost got murdered” at Leicester Square.

It was an “attempted murder” and the assailant “was armed and dangerous,” the Singaporean student told the police, adding that the assailant had a knife and had tried to rob him.

Although Mr Hing was shaken and kept asking for his glasses, he was able to describe the attacker as “Black, Somalian, skinny…1.7 metres tall…dark blue jacket…looks 25.”

At that point, Sherwin handed his phone to Mr Hing and went to look for the student’s glasses, while the police and ambulance arrived.

According to a report in The Straits Times (ST), Mr Hing recovered quickly, which is why he did not contact the Singapore High Commission in London.

ST quotes him as saying, “I have recuperated and I am feeling better – still alive and kicking.”

As for the YouTuber, he told Insider news, “As I was rushing over, adrenaline mixed in with my anxiety. I truly really hope, if anything, I’ve maybe inspired people to not be afraid. To try and step in, and to stop a bad-looking scenario from turning (from) bad to fatally worse.”

The Metropolitan Police said the suspect had not been found and no arrest had been made, but the incident is still under investigation.

“What spurred me to help the defenceless man? I’m not sure. My mind and thoughts were blank. I just wanted, and tried, to stop the attack,” Sherwin told Insider.