In the video, the individual claims that all Indian girls are "very rude," "very bad" and "like to do bad things," before calling Indian families and households "smelly" A young netizen has sparked intense outrage online after posting a TikTok video, in which he denigrates Indians as “smelly” and “bad”.

In the video, the netizen – whose username is @iloveyouforeverjulie – provided five reasons as to why he would never date Indian girls. He first claims that all Indian girls are “very rude,” “very bad” and “like to do bad things,” before calling Indian families and households “smelly.” He said:

“Indian house are very smelly – don’t know they put what thing and their house are so smelly. I don’t know what Indian use for perfume because they spray on their body and they’re so smelly – I don’t like. I smell the Indian perfume ah, I fell want to vomit leh.”

Pretending to gag, the netizen said, “If you got hurt ah, sorry. I don’t like you, I hate you.” He went on to warn Indian girls not to disturb him or his girlfriend before declaring that he and his girlfriend love each other forever.

Netizens responding to the video were appalled at how casually the young man expresses such racist views and asked the Singapore Police Force to look into the matter and take action against the netizen for stirring hatred between the races.

Some others suggested that the netizen could be retaliating against bullies and needs to be taught that he should neither hold such views nor broadcast them online. 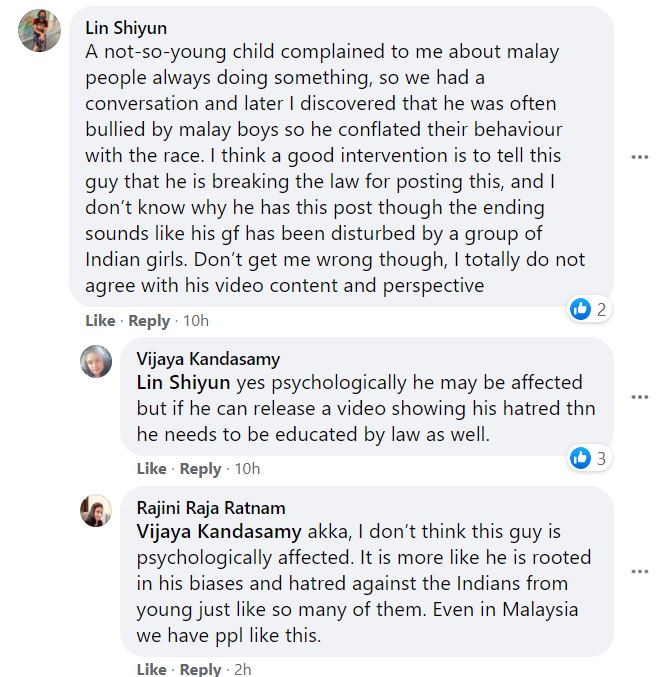