The son of a taxi driver shared the story of how an Indian couple seemingly led his father on a long and convoluted route in order to avoid paying the cab fare.

Josh Ong, the cabbie’s son shared details of what transpired.

He recounts that when the couple got into the cab at Sembawang, they told the driver to take them to Block 469, Ang Mo Kio Avenue 10. However, halfway through, the man added an additional location of Block 661 Hougang Ave 4.

As per his request, the man alighted at Block 469 Ang Mo Kio Avenue 10.

Upon reaching Hougang to drop off the woman, the fare came up to S$25. Even after trying several times , the transaction was not successful so the cabbie offered to drive her to the nearest ATM machine to withdraw cash.

She insisted that her account had funds and that he use her card for the payment. Despite trying many times, the payment failed. The taxi driver even offered to drive the woman back to Ang Mo Kio so that her boyfriend can pay the money, at no extra charge.

The woman declined. The cabbie even gave her the option to leave her phone with him while she went upstairs to retrieve some cash from her family members but she said that no one was at home.

After arguing for 15 minutes , she asked the cabbie for his phone number and told him that she would whatsapp him an image of her identity card, adding that her IC was with her friend. She also said that she would do a bank transfer the next day to pay for the cab charge.

The cabbie made a phone call to the police, and when the woman realised this, she said that she had to use the washroom and immediately ran towards the opposite block.

In his Facebook post, Josh wrote that he included a screengrab of the woman’s IC, which looked like it was edited to reflect an address in Yishun, since the woman had asked his father to drop her off in Hougang. 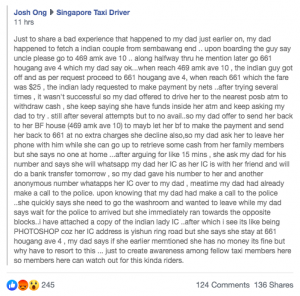 TISG has reached out to Josh and his father for further comment.