The Independent Singapore News
Home News Yishun resident stunned by cow at HDB flat but this is why... 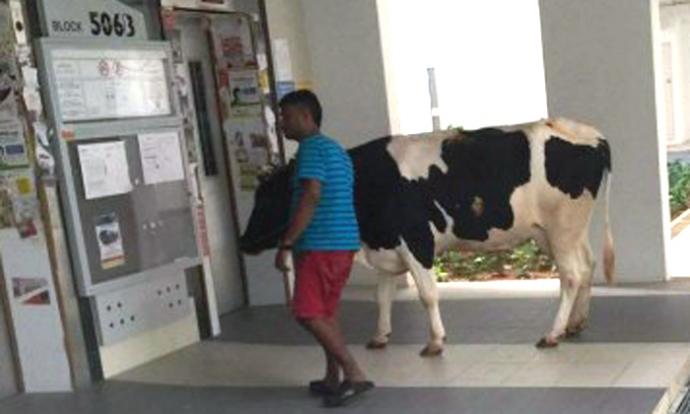 A Yishun resident’s photos of a cow at a lift landing have gone viral. The resident posted photos of the cow at the lift landing of block 506B Yishun Ave 4 and captioned it: “Today TOTO huat already”.

Netizens who responded to the post were amused to see the cow in an HDB estate. Some even faulted the HDB for allowing such practices in public housing estates. But the Facebook user who commented “huat” (be prosperous) is not far off when he made that comment. Hindus who bring a cow into their new house, do it precisely for that reason – a wish for prosperity.

For the Hindus, bringing the cows into the house is auspicious and is known as the Govardhana pooja. “Go” means ‘cow’ in sanskrit and “vardhana” means ‘to increase’. Hindus view the cow as ‘Kamadhenu’, a domicile of the Mahalaxmi – the goddess of prosperity. Once the cow enters the house, it is believed to remove poverty and bless the family members of the residence with good health and wealth.

Hindus who wish to have the ritual performed in their house have work with a local dairy farm to get a permit from the Agri-Food and Veterinary Authority (AVA). Such cow rentals and permits are not cheap and cost anywhere between $1,000 to $1,500.

If the cow urinates in the house, it is considered a bonus as it means an assurance of blessing.Follow us on Social Media