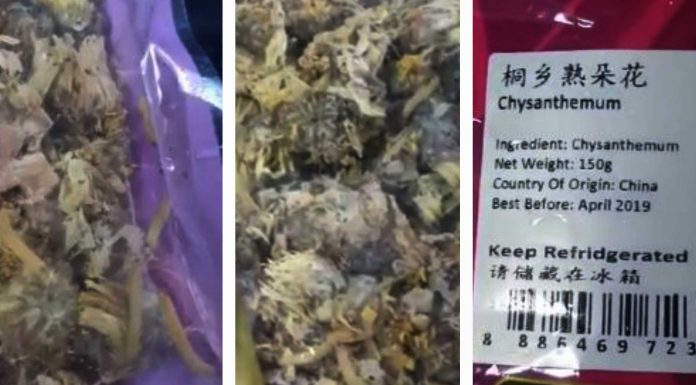 A video of a Singapore woman uncovering worms in a Chrysanthemum Tea packet she purchased from a local Traditional Chinese Medicine shop has been circulating online. In the video, countless worms can be seen squirming about among the tea leaves.

The woman who shot the video also flips the packet around to show that the tea packet only expires in April 2019:

<Reader Contribution>Worms found in packet of chrysanthemum tea from this Chinese medicine shop… not even expired! Be careful everyone

Posted by All Singapore Stuff on Saturday, 3 February 2018

Interestingly, netizens responding to the video on social media said that the worms are good since they are an indication that no pesticides were used when harvesting the chrysanthemum flowers:

William Oh: Chrysanthemum is plant. So having worms is normal. Even the vegetables we eat also have worms just that farmers spray pesticide. Just wash the chrysanthemum before u brew it. Whats the huha?

Sunny Tan: This is to proof this shop sells original, after feeding worms don’t die, got it.

Katzzie Lang: Very simple, got worm mean no pesticide, no worms mean got pesticide, same apply to rice, worm not maggot?! Which is worst? I tell you la, human more worst

Benson Fong Yow Fook: Got worms is common. Wash and can boil. Got worms mean no insecticle.