With face masks out of stock, Singaporeans resort to plastic bags, umbrellas, shawls and even underwear

They take unusual precautions, whether on the bus, in the train or in the supermarket

Singapore — While the Government has urged only people who are unwell to wear masks,  many still want to cover their noses, mouths and even faces lest they contract the novel coronavirus. With there being a nationwide shortage of masks, Singaporeans have had to resort to all kinds of ways to cover up.

With the Disease Outbreak Response System Condition (DORSCON) at Orange, meaning moderate disruption to daily life, Singaporeans are still going about their everyday tasks but have been warned to practise good hygiene habits and to stay home if they are ill.

Much like the woman seen at Vancouver International Airport (VIA) wearing a plastic water container on her head as a make-shift mask, some Singaporeans are taking extra precautions as well.

In the photo, which made its way around social media, the woman at VIA was clearly seen to be wearing a mask within the bottle, which she used as some sort of extra protection around her face. Her ponytail is seen to be protruding out of a hole cut into the plastic bottle.

Similarly, photographs of Singaporeans on public transport show one using what looks like a pair of underwear as a make-shift face mask and another wearing a raincoat hood. 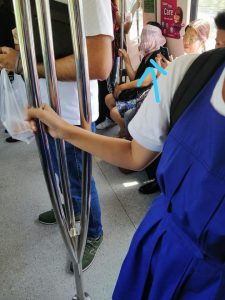 Others merely use shawls as a barrier between themselves and possible germs they may come into contact with – or so they think. 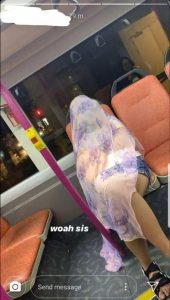 One person even used an umbrella on the MRT.

A woman in a crowded NTUC supermarket even used a plastic bag to protect her hair while doing the shopping.

Speaking in Parliament last Monday (Feb 3), Health Minister Gan Kim Yong said that, based on what was known so far, “the virus is carried within droplets emitted from an infected person over a short distance, such as when the person coughs or sneezes”.

The thought of contagion, coupled with the lack of masks, has clearly led to people coming up with their own ways of protecting themselves. /TISGFollow us on Social Media