Home News Featured News Will our next PM be a clown?

Will our next PM be a clown? 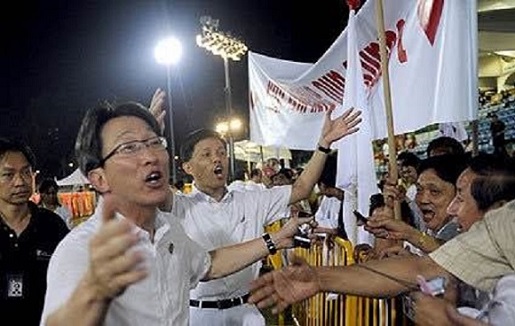 By leadership renewal, PAP is referring to a handpicked PM. PM Lee’s successor has already been chosen by those in the highest echelons of power and all that we are seeing in the MSM is wayang.

This is no ordinary wayang but a poorly scripted one because 2 of the candidates would have been ministers, and in politics, for only 5 years by 2020: if Ong or Ng became PM, it would mean other longer serving ministers are, for lack of a better description, jiak liao bee.

In the corporate world, the Dy CEO will succeed the CEO for reasons obvious to an idiot. Similarly for Singapore Inc, our 2 DyPMs who are the most qualified to take over the PM. Why need to have deputies but only to appoint a less qualified person when the leader steps down?

Did these 2 well-qualified DPMs become disqualified after 2020 because they suddenly became be too old? Succession planning = Plan for DPMs not to succeed? Don’t insult Singaporeans until like that lei.

The six candidates selected to participate in this wayang:

Of the 6 candidates, isn’t it strange to have 3 ex paper generals? Politicians with a military background are a dying breed in third world countries – even Myanmar – but Singapore cannot do without one as PM?

Our cabinet seems unable to do without clowns like Chan Chun Sing who has been assigned to serve in different ministries in order to qualify him. Was having Wong Kan Seng as DPM not bad enough? Did PAP conduct a poll among its members to determine if Chan had their support? Or was Chan already handpicked by you know I know who?

Ong Ye Kung is a quitter where Aljuneid GRC constituents are concerned and why he even made it to the PM list is anyone’s guess. Since Ong wasn’t popular with Aljuneid voters, he figured he might as well run off to ride on the coattails of a minister in another GRC in order to become a minister. PAP had already made it clear to Ong he was ministerial calibre before polling day in 2011.

Since Singaporeans do not trust quitters, Ong will never become popular as PM.

PM material to the PAP is a candidate who must be more than willing to take PAP’s secrets to his grave and Lawrence Wong fits the bill. On the issue of the release of all past cabinet records, which will reveal lots of PAP’s misdeeds, Lawrence, then MCCY Acting Minister, insulted the public by stating that this “may not lead to better outcomes”. WTF was he saying I don’t think he himself knew. But why not scale up and, like master story teller Khaw, tell us this might have caused undue panic?

On another issue of transparency, Lawrence gave a rubbish reply with regard to the stratospheric consultancy fees of NAC’s rubbish bin centre. A rubbish-reply spewing PM, anyone?

No. 5 and No. 6 are hopeless paper generals who could not even survive a day in the real private sector, ie not government-linked companies. Without an understanding of the real business world outside PAP’s bubble, how are they expected to lead a country?

In terms of experience, Minister Heng is the most suitable candidate but his oratory skill may put mosquitoes to sleep. Not insulting him or expecting him to be anywhere as good as Obama, but this is a very important quality of a leader. After 2020, Heng’s age will also disqualify him and together with his health issue, Heng should be retiring.

It is strange that after being PM for 12 years, PM Lee suddenly remembered about leadership renewal. Shouldn’t this have been an issue years ago? Why insist on staying for 3 terms which is not the norm in any democratic country? Must realise this only after nearly peng san on stage?

Heng aside, the public has little confidence in the 2 paper generals, one clown, one quitter and a rubbish spewer as our future PM. But since Heng won’t be in the running, there is a possibility that we may just end up having a clown as our future PM.Follow us on Social Media