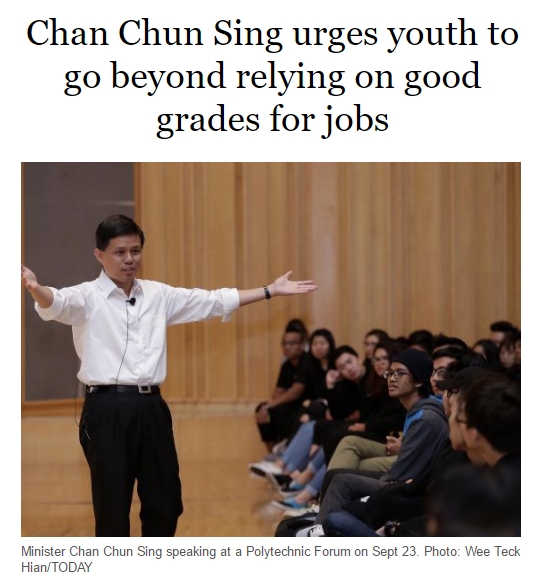 This is in response to Minister Chan Chun Sing statement when he addressed students at the Polytechnic Forum a few days ago.

From my point of view as a millennial I find it doubtful that many of us would want to “fight” for the right to be called Singaporeans. And here are 3 reasons why:

1. Cheapening of national identity
Firstly what is the Singaporean identity? Last year during SG50 PM Lee Hsien Loong said: “Our resolve to defend ourself is unquestioned. Our spirit and confidence is robust. our unity and identity as a people has never been stronger”

This was only to be contradicted by Minister Ong Ye Kung with this statement: “[we] must understand that singaporean as an identity is nothing very much.. The Singaporean identity itself is rather quite empty.”

Even among ministers the Singaporean Identity seems to be an issue for debate.

We have to ask ourselves if the Singapore identity been cheapened by our lax immigration policies. What does it mean to be Singaporean if foreigners can get scholarships so easily?

Not to be xenophobic but is there some truth to the common rhetoric of “NS for Singaporeans, jobs for foreigners “?

Whether such lax immigration policy is beneficial for our country may be up for debate, but the fact is, it plays a part in diluting our national identity and cheapening our Singaporean-ness – and that is not up for debate.

When I was young most people could speak English. But know I am faced with getting hair cuts by someone who can only converse in Chinese. All the efforts of the ‘Speak Good English’ campaign just went out of the window.

You will be lucky if the person serving you can even speak English. Way to go spitting on the grave of Lee Kuan Yew.

It’s hard to love Singapore because our government has such a thin skin. When Roy spoke up about how the CPF system may be flawed, he was faced with a defamation suit. When he and Teo Soh Lung posted something online on Cooling-Off Day both of them got their houses raided and personal belongings taken away (BTW Soh Lung is in her sixties).

We even arrested a teenage blogger and sentenced him with 4 weeks of jail time for posting a video critical of Lee Kuan Yew that wounded the feelings of christians.

3. It has gotten even more dangerous to love singapore
Of you are still wondering why young people may not want to care about local Singaporean issues or “fight” to be called Singaporeans, wonder no more.

It has gotten even more dangerous to care about singapore. If you care you will comment and try to add input and contribute to national discourse .The problem is we have not been making Singapore a very nice place to do so.

Recently we amended our already vague contempt of court laws to be even more vague and carry a harsher sentence.

This “Administration of Justice Act “ bill means that we cannot comment or write anything about any ongoing court cases – even if that case would be in public interest.

So in short, our government may say that they want us to fight for the right to be called Singaporeans, but they have demonstrated to be too thin skinned to accept anyone fighting with a differing opinion from theirs.

Singapore is a hostile environment for anyone who cares about the country, until this changes you can expect the next generation to want to move to greener pastures, or at best be apathetic towards being Singaporean.