The Independent Singapore News
Home News Featured News "Why are our ministers paid millions then?" - Locals blast ST over...

“Why are our ministers paid millions then?” – Locals blast ST over survey that suggests salary is not a main driver of job satisfaction among Singapore workers Several Singaporeans have blasted the Straits Times for covering a survey that found that salary is not the biggest driver of job satisfaction for Singapore workers.

The survey, conducted by data collection platform Qualtrics and released yesterday, found that confidence in senior leadership and helpful management when resolving work-related issues trump salaries as the bigger drivers of satisfaction among Singapore workers.

Asserting that employees appreciate it when employers invest in them, the survey also found that Singaporeans felt higher job satisfaction, increased desire to go to work and higher staff retention rates when they received sufficient training to perform their job effectively. This is apparently a factor unique to Singapore workers, compared to workers in other nations.

Several ST readers responding to the report have blasted it for not reflecting realities on the ground, while some pointed out that it is unfair to make such broad assertions that salary is not the biggest driver of job satisfaction when the survey only polled a relatively small sample size.

Indeed, the study polled just over 500 participants from Singapore who were asked to answer questions in a multiple-choice format “with a five-point scale for participants to choose from, ranging from “always” to “never” or “extremely satisfied” to “extremely dissatisfied”.”

Many Singaporeans also sarcastically asked why political office-holders in Singapore are so highly paid, if salary is not the biggest driving force behind job satisfaction: 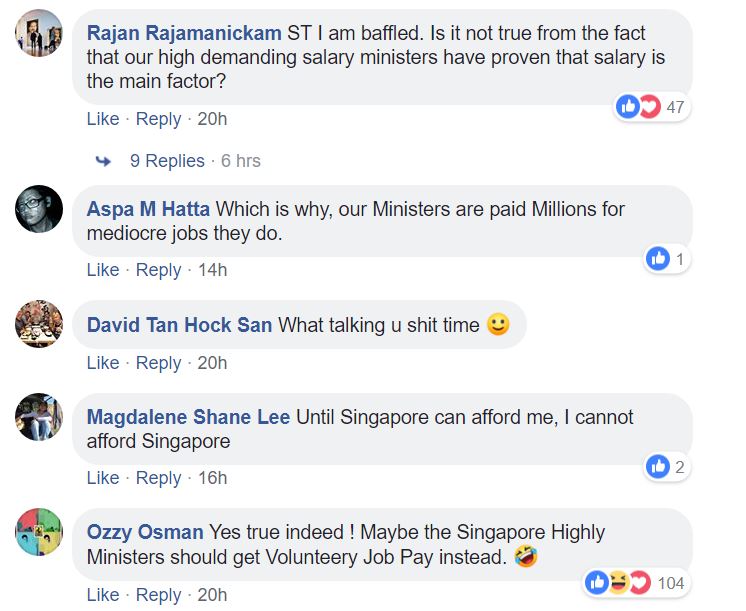 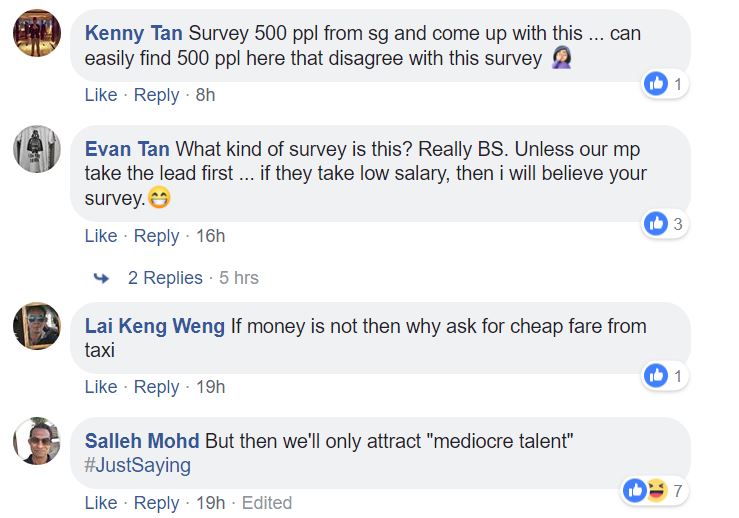 The Government has maintained that high ministerial salaries are crucial to attracting and retaining talented individuals in politics. Back in 1973, founding Prime Minister Lee Kuan Yew said:

“Too great a disparity between Ministerial rewards and what Ministers, with business experience and professional qualifications, could earn outside will make it increasingly difficult to assemble a successor government.”

More recently, in 2011, PAP MP Lim Wee Kiak linked ministerial pay to the “dignity” of politicians. He had said:

“If the annual salary of the Minister of Information, Communication and Arts is only $500,000, it may pose some problems when he discuss policies with media CEOs who earn millions of dollars because they need not listen to the minister’s ideas and proposals. Hence, a reasonable payout will help to maintain a bit of dignity.”

Then, last year, former Prime Minister and current Emeritus Senior Minister of Singapore asserted that “Ministers are not paid enough!”

Slamming a suggestion to fund elderly pension by cutting million-dollar ministerial salaries, Goh indicated that the Government would end up with “mediocre” candidates if it slashes ministerial pay:

https://theindependent.sg.sg/singapore-prime-ministers-annual-salary-jumps-from-42000-to-2-2-million-within-50-years/Follow us on Social Media