The Independent Singapore News
Home News Who won the election? According to Tommy Koh, Singapore did

Who won the election? According to Tommy Koh, Singapore did

Mr Koh asserted that the GE should be considered as a victory for both the PAP and the Workers’ Party (WP), which had seen unprecedented gains

In it, he described being shocked to hear that political observers outside Singapore, Professor Michael Barr from Flinders University in Australia and Professor Bridget Welsh from the University of Nottingham Malaysia and National Taiwan University, had characterized the election’s results as disastrous for the ruling People’s Action Party (PAP), since the PAP had won all but 10 seats in Parliament as well as 61.2 percent of the popular vote, results that would be considered outstanding in other democracies.

At the request of my editor, Chua Mui Hoong, I have written an essay on GE 2020. I made the following points. First, it…

Instead, he asserted that the GE should be considered as a victory for both the PAP and the Workers’ Party (WP), which had seen unprecedented gains. Additionally, WP leader Pritam Singh has officially been recognized as the Leader of the Opposition by Prime Minister Lee Hsien Loong, perhaps signaling an acceptance that the opposition is “here to stay and is likely to grow stronger in the coming years.”

Professor Koh also outlined several lessons from the GE, such as the distaste of Singaporeans for personal attacks, saying that the attacks against playwright Alfian Sa’at (and by extension Mr Pritam, who had defended him in Parliament), WP candidate Raeesah Khan, Singapore Democratic Party’s (SDP) Chee Soon Juan and via Pofma, Paul Tambyah, had not been “well received.”

Another gain from the election is that more women not only contested but won seats by large margins in Single Member Constituencies, adding that his dream is for Singapore to one day have a female Prime Minister.

He added that the WP had won the newly-created Sengkang GRC, where the young demographic had made their wishes known and carried the vote for the opposition party.

All these, he says, are gains for the whole country. He wrote his opinion piece, “I also agree with Singapore Institute of International Affairs chairman Simon Tay’s comment that the correct reply to the question of who won the election is that Singapore won the election.”

Professor Koh’s post has been widely shared and commented on, with many netizens agreeing with his points.

Writer Sudhir Thomas Vadaketh, as well as others, picked up on the Professor’s dream of having a woman Prime Minister one day.

One netizen asked Professor Koh about having a minority Prime Minister, which the Ambassador-at-Large obligingly answered.

However, some voiced out their disagreement with Professor Koh’s points. 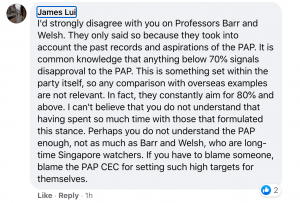 Read also: Young People do not vote for Opposition because it is “Vogue”: A response to a letter in the ST Forum

Young People do not vote for Opposition because it is “Vogue”: A response to a letter in the ST Forum