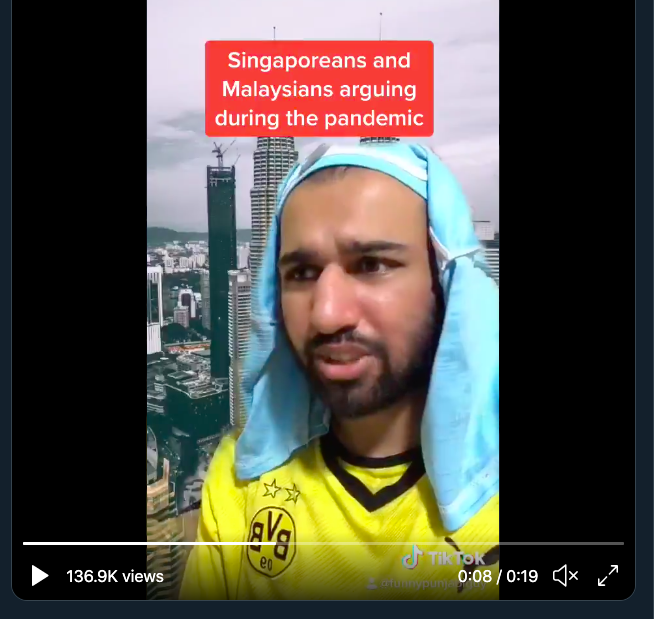 Singapore—If you need a laugh today, check out this clip from comedian Funny Punjabi Guy who uploaded a 19-second video entitled “Singaporeans and Malaysians arguing during the pandemic.”

The video has 6,000 likes and shares on Twitter since it was uploaded on September 28.

He captioned it, “I miss Malaysia!”

The video has two characters, both played by the comic, comparing life in Malaysia and Singapore. It starts with the Singapore character saying that life is better in his country, and follows it up by saying that one dollar in Singapore is worth three Malaysian Ringgit, and then laughing.

The Malaysian guy retorts, “But things are cheaper!”

Mr Singapore then says, “Okay, but we have the strongest passport.”

The Malaysian man then says, “But can you guys travel?”

Mr Singapore says, “Stop,” but the Malaysian man says, “You can go where? Chinatown? Little India?”

To which Mr Malaysia says, “Bodoh.”

Netizens could obviously relate to the video. One Singaporean wrote that he was jealous, “Singapore is just too small lah”

For one netizen, the video is proof that “Singaporeans have a sense of humour.”

A number of commenters really enjoyed the “bodo” at the end.