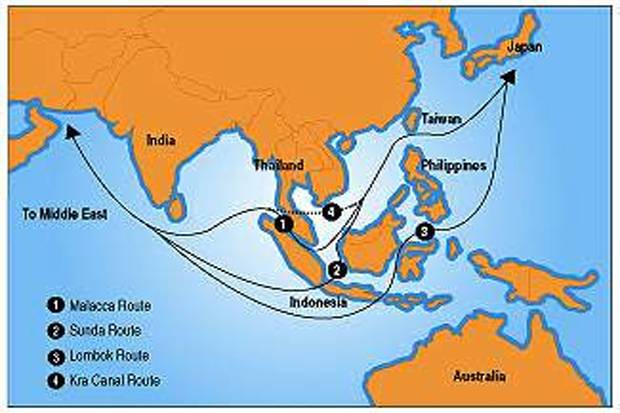 According to an article published by LaRouche PAC on Tues (17 Jan), the new Thai King Vajiralongkorn who ascended the throne last year is reported to be favorable to building the Kra Canal. It also said that several leading figures on the Thai Privy Council are fully behind the project (https://larouchepac.com/20170117/major-breakthrough-kra-canal-potential).

Mr Lyndon LaRouche who is the man behind LaRouche PAC is an ally of Pakdee Tanapura. Mr Tanapura is the international director of the Board of Directors of the International Executive Committee for the Study of the Kra Canal Project in Bangkok. He’s been pushing for the Kra Canal project for the past 30 over years (http://schillerinstitute.org/conf-iclc/2013/1102_la/tanapura.html).

Of course, if the Kra Canal materialises, ships going from Indian Ocean to the Pacific and vice versa will naturally sail through the canal to cut travelling time and cost, by-passing Singapore altogether.

The project has been talked about by the various Thai authorities on and off for many years. In 2001, then PM Thaksin adopted a resolution to create a national committee for the study of the Kra Canal (Mr Tanapura was elected the international director of the committee). But Mr Tanapura disclosed that later, after being pressured from the royalty side as well as from Singapore side, Thaksin announced that Thailand did not need the Kra Canal.

Incidentally, while he was the PM, Thaksin sold his family’s share of telecom company, ShinCorp, to our Temasek at the beginning of 2006, making billions of dollars. The sale caused great controversy in Thailand as Thai law regarding foreign investments in the telecom sector had been amended just prior to the sale. And coincidentally, the law amendment was proposed in 2001, the same year that Thailand was convening a committee for the study of the Kra Canal (https://en.wikipedia.org/wiki/Sale_of_Shin_Corporation_to_Temasek_Holdings).

Coming back to the Kra Canal, it was also revealed by Asia Today International (2004) that the late Thai King Bhumibol, Vajiralongkorn’s father, was firmly against it because he felt that it would split his Kingdom into two.

By Sep 2006, the military, already fed-up with Thaksin’s excesses, got rid of him in a coup. However, the committee for the study of the Kra Canal continues to exist. Though the current Thai PM Gen Prayut Chan-o-cha has said last year that Thailand has no plans to contruct the Kra Canal “during this government’s term”, Mr Tanapura and his cohort continues to push for Kra’s construction, as evidenced in this interview of Mr Tanapura by Financial Times last year (http://www.fdiintelligence.com/Locations/Asia-Pacific/Thailand/Kra-Canal-Project-chief-spells-out-win-win-advantages?ct=true):

“FT: What is missing for the Kra Canal to be developed?

Tanapura: Decision making in Thailand is very slow. The present government, led by prime minister Prayut Chan-o-cha, is aware of the project, but it’s such an ambitious endeavour that the government is still hesitant because of its consequences for the whole country. On the other hand, the government is having troubles in promoting economic development and it hasn’t got many options left. It has to go for the Kra Canal, we will hear about that soon.

FT: The required investment to build the Kra Canal is substantial. Who are the investors backing the project?

Tanapura: We are pretty much supported by a group of Chinese private companies (including Chinese tycoon Wang Jing’s telecom company) pushing hard to develop the canal, and now we are working with Thailand’s military government to make it happen.”

Now that King Bhumibol is no longer around and the new King Vajiralongkorn is reported to be in favor to building the Kra Canal, the situation may change drastically since there is no longer any pressure coming from the royalty side.

Furthermore and according to US diplomatic cable leaked by WikiLeaks, Vajiralongkorn has been described as one with a gambling problem. The leaked cable quoted senior Singaporean foreign ministry official Bilahari Kausikan as saying that “(Thaksin) made a mistake in pursuing a relationship with the crown prince by paying off the crown prince’s gambling debts” and that Vajiralongkorn is “very erratic, and easily subject to influence” (http://www.smh.com.au/world/top-singapore-officials-trash-the-neighbours-20101211-18thg.html).

If this is true, convincing the new King to assent to the construction of Kra Canal would be a breeze for those rich Chinese tycoons, undoubtedly, with Beijing’s blessings.

—
Edited and republished from the Facebook page ‘We want Minister Grace Fu to resign‘.Follow us on Social Media