At least 37 trapped in tunnel, rescuers still toiling to reach them. 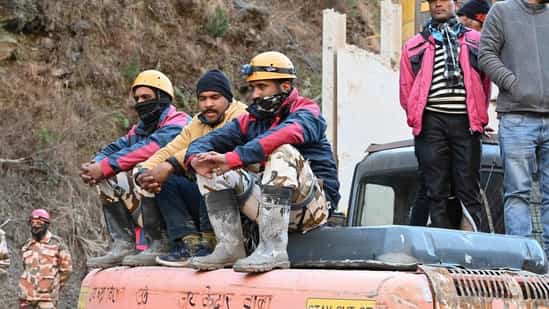 Joshimath — Luck played a part in the timely rescue of 12 workers from one end of the 1.7km-long tunnel of NTPC Limited’s hydropower project in Uttarakhand’s Tapovan in the immediate aftermath of the flash flood on Sunday. The rescuers toiled for at least four hours to remove the waist-deep slush from the tunnel’s exit; then an engineer employed at the project alerted the Indo-Tibetan Border Police (ITBP) about an escape door located about 300 feet away from the exit that could serve as an extraction point for the workers.

Thereafter, it took ITBP men just about 90 minutes to rescue the dozen workers, three of whom were unconscious, and all of suffering from hypothermia. Importantly, all were alive.

But as the sun set over the snow-capped mountain peaks, so did the luck of the rescuers. When it came to saving workers — at least 37 of them — trapped at the other end of the tunnel, the rescuers continued to labour till well into the day on Monday, in an effort to reach them.

“We believe the workers are trapped at least 200 metres inside the tunnel. The only choice we have is to use an earth mover to remove the slush, one scoop at a time. We have been able to move 50 metres (into the tunnel) so far (until Monday afternoon). Unlike the other end of the tunnel, there is no safety valve on this side,” said Benudhar Nayak, commandant of ITBP first Batallion, who is overseeing the operations along with teams of NDRF and the Indian Army.

About 8km from this spot, in Raini village, another group of rescuers is removing slush in front of a smaller hydropower project that was completely washed away by the flash flood, but their progress has been slow. “There is no rescue going on here. We are just hoping to recover bodies that may be trapped in the gates of the power plant,” said Sumit Kalkhudiya, an Indian Army officer.

That the floods happened on a Sunday helped save lives.

On Sundays, just about half the staff work at the two project sites. At the Tapovan site, about 150 workers were on duty and at Raini site, about 50.

At Tapovan, around 50 men were working in the tunnel; the others were deployed elsewhere. But when the water and debris came gushing down the Dhauli Ganga river around 10.45am, all workers, in the tunnel and out of it, were all under water level.

As the flash flood roared, many workers tried to run up the hill. Some succeeded. Others were washed away within seconds. And some others were trapped in the tunnel.

According to rescuers and workers, the 1.7 km-long slanting tunnel under construction is about 20 feet high and 15 feet wide. “Inside, the main tunnel is joined by another tunnel about 300 metres long,” said Harinder Singh, a welder at the project who helplessly watched from the road above as many of his friends and colleagues were washed away or trapped inside.

When the flood hit, the tunnel was quickly filled with water, mud and debris. The rescuers, who arrived at the scene a little after noon, and began by focusing on the tunnel’s exit as it was down the slope and had much less slush than at the entrance. At that time, the rescuers weren’t sure how many workers were trapped at that end.

“Since this end of the tunnel was difficult to access with our machines, we used wooden planks and steel sheets to reach the entrance. Then we used basic tools to keep removing the slush. We weren’t making much progress when an engineer walked up to us and mentioned an escape door, about 8 by 8 feet, on the side of the tunnel,” said Nayak.

The rescue was briefly halted as villagers used whistle to warn about the water level rising again, but the operation resumed soon.

“In the next 45 minutes, we were able to locate the escape door amid the slush, broke it open, and removed the iron mesh,” Nayak added.

The rescuers found the workers trapped just about 30-40 feet away from the valve. “Many of them had lost their shoes, and three of them were waist deep in the slush, but they had all held on to iron grills inside,” said Kalam Singh Negi, head constable with ITBP.

The rescuers threw ropes to the trapped workers, but they were so weak, tired and affected by the cold that they couldn’t grab them.

“One of our officers then entered the tunnel to tie each of them with ropes before we pulled them out,” said Negi. By the time the last of the men inside was brought out, it was 5.45pm on Sunday.

Three of the rescued men were unconscious. The others were suffering from hypothermia. Some raised their arms to celebrate their rescue.

“They were all shivering. Some of them begged us for hot water. We washed them with warm water, gave them necessary injections, dressed them in ITBP uniforms and used our phones to help them make video calls to their families,” said Maneesh Chandra, an ITBP constable.

The other end of the tunnel, meanwhile, remained inaccessible despite the use of earth movers.

Initially, three earth movers of various types worked to remove the slush at the entrance of the tunnel, but once the entrance was breached, the progress slowed since only one machine could work at once.

ITBP officers estimated that the workers trapped on this side were about 200 metres into the tunnel. The workers, however, estimated that they were trapped at least 500 metres inside. “At the rate the work is going on, it could take up to a week to rescue them. It is so cold even out in the sun, I don’t know if my brother will make it,” said Joginder Tamta, whose brother, a worker at the site, is trapped inside. The two are from Chamoli.

Every now and then, Tamta dialled his brother’s phone number. “Often it is switched off. But sometimes the number comes across as busy. That is the only thing that has kept me hopeful,” said Tamta, squatting in anticipation a few hundred metres from the rescue site.Follow us on Social Media