‘Typical communist loyalty.’ Netizens react to PR from China who mocked Singaporeans for not choosing Sinovac

Some netizens tell PR: If you're not happy, leave

Singapore—Netizens had strong reactions to the video of a man claiming to be a permanent resident from China who mocked Singapore for initially refusing to use Sinovac, a Covid-19 vaccine.

Last week, the Government announced that the vaccine would be made available for use under the Special Access Route (SAR).

In the video, a man filmed himself while disparaging the Singapore Government’s decision regarding the vaccine.

At one point, he said that the “Sinovac and Sinopharm (vaccines) would be available soon” in Singapore but added that the vaccines would only be available at private medical institutions.

“The bad news is, you have to pay for it yourself. It will not be cheap,” he said.

“Also, if you suffer from any side effects after using the China vaccines, the Singapore government will not be responsible,” he pointed out, referring to the Sinovac-CoronaVac vaccine not being covered by the Vaccine Injury Financial Assistance Programme (VIFAP), a financial assistance scheme for individuals who suffer from severe side effects after receiving a Covid-19 vaccine.

He then asked why it was “so difficult” to get vaccinated with a “made from China” vaccine.

“Is it because of the cost or because Singaporeans only compatible with ‘made in USA’ vaccines?”

The man then went on to say, “I believe there’s a complicated story behind Singapore’s choice of vaccines. As a PRC citizen working and living in Singapore, who is contributing to Singapore’s GDP, I know Singapore very resourceful, but you sure you want to be cocky now?,” and ended the video by saying that the “China vaccine is the best in the market.”

Netizens have been none too pleased with his criticism of the Government’s choice regarding vaccines made in China, and have criticised the man.

Another claimed that he was “biting the hands that feed” him, and asked who he is to speak on behalf of all the PRC residents in Singapore.

Some netizens took the “if you’re not happy, leave” route.

Other commenters kept cooler heads. Some replied that the Health Sciences Authority (HSA) has “a stringent procedure to certify safety of all pharmaceuticals products” and does not make exceptions. 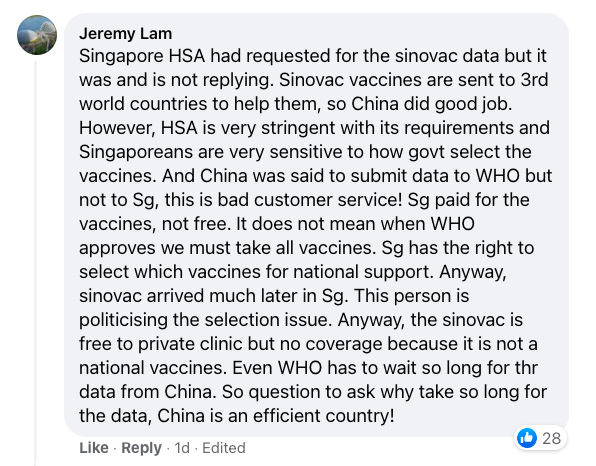 Another stated that Singaporeans had simply followed what the Government recommended.

Others pointed to the greater efficacy rates of other vaccines in comparison to those made in China.