Netizens have taken aim at both Sharul Channa and Kiran Kandade

Another woman, Ms Kiran Kandade, commented on Ms Channa’s post, saying that she had also received sexual harassment from Mr Viswa in 2016, not just once, but repeatedly.

Since then, while the women have been praised by many, including gender equality advocacy group AWARE, they have also received backlash for making Mr Viswa’s behaviour public.

A number of online commenters have taken aim at both Ms Channa and Ms Kandade. Mr Viswa has also allegedly said that his remark to Ms Channa had been met with laughter, and that “three female colleagues, as well as Ms Channa’s husband were present” when he made his comment.

And now, the comedian’s husband, Mr Rishi Budhrani, has spoken up, denying that he had been present at the time of the interview.

In a Facebook post he wrote, “At no point did I hear any conversation from Mr Viswa or his colleagues, (Sharul was plugged into her headphones, as is quite common for people on ZOOM calls).”

He added, “I would like to state that (Mr Viswa’s) comments, as quoted in his statement to the media, were inappropriate sexual innuendo.”

Mr Budhrani wrote that Mr Viswa had “been forwarding a text/Whatsaspp message to his friends/family members, indicating his side of the story. This is more detailed than his statement covered in the media,” and provided a screenshot as proof. This was apparently picked up by others, including a netizen by the name of Bruce Kent, who called Ms Channa’s “version bias and selective (sic).” 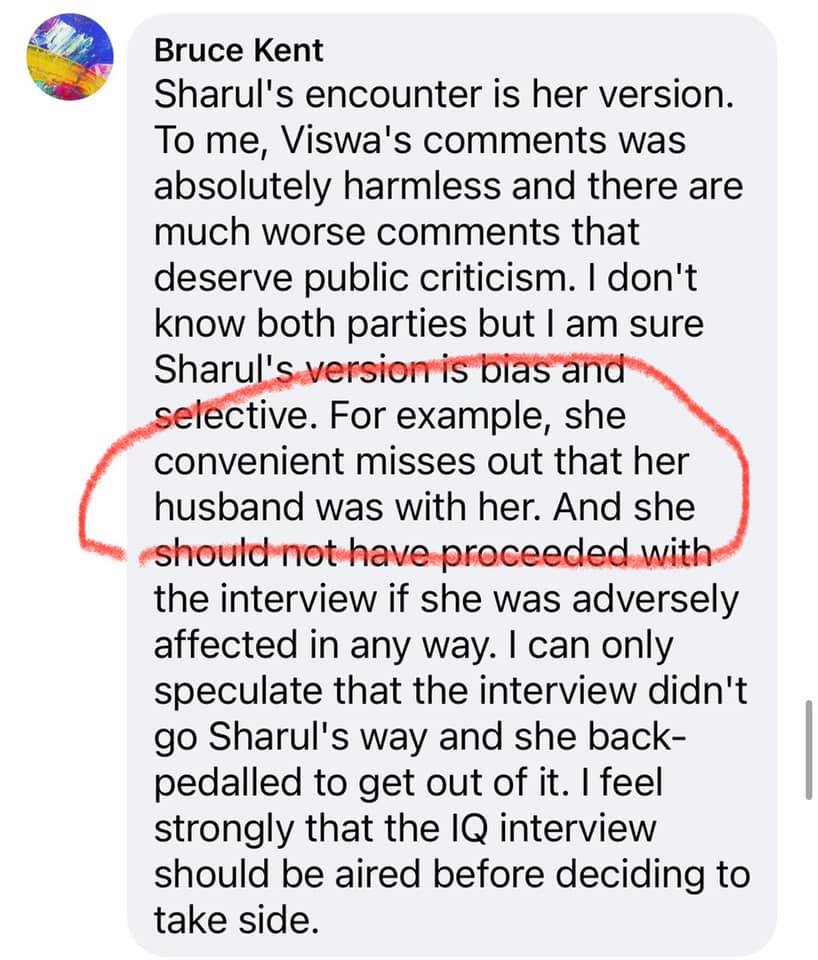 Mr Budhrani ended his post by saying that he stands firmly with Ms Channa, Ms Kandade and “other brave women sharing their accounts.”

Ms Channa was interviewed by the former NMP for his online show, which discusses socio-political issues. But before the show started recording, Mr Viswa asked about the rose she was wearing on her collar, which she had put on to distract from the pattern of her blouse.

He replied, “It would be more distracting if you were wearing only that rose,” which was heard by other members of his staff.

And while she shocked at his “inappropriate and offensive” remark, she went through with the interview. A few minutes after the interview ended she called the show’s producer to say she was uncomfortable with Mr Viswa’s comments, and that she wanted no part of the show.

The producer apologised and “immediately took action,” and a short while later Mr Viswa apologised via email as well.

Later on, the comedian wrote about the incident over social media, writing “THIS is one of the biggest issues women face; workplace harassment. And If I don’t speak out about this, I am not being true to myself and what I stand for.”