Singapore—Comedian Sharul Channa did not take a sexual remark by a former Nominated Member of Parliament lightly, for which she has been applauded by gender equality advocacy group AWARE.

AWARE has praised Kiran Kandade as well. Ms Kiran also made public the inappropriate remarks made toward her by the former NMP, Mr Viswa Sadasivan.

In a Facebook post on Sunday (Feb 7), AWARE wrote, Firstly, Sharul and Kiran were absolutely right in identifying this as workplace sexual harassment. There are many misconceptions about sexual harassment, such as the idea that the victim/survivor has to indicate her displeasure at the time of the incident for it to count. This kind of thinking deters people from reporting their case at all, as they feel that their inadequate response at the time weakens their case.”

Ms Sharul wrote in a Feb 4 Facebook post that she had been interviewed earlier that day by Mr Viswa over Zoom for an online series called Inconvenient Questions.

She wrote that it was a professional interview for a show online that deals with socio-political issues. Having only spoken to the show’s staff in the past, it was the first time for her to meet the former NMP.

On the day of her interview, she happened to be wearing a rose on her left collar.

Before the show started recording, Mr Viswa asked about the rose, which she said she had put on to distract from the pattern of her blouse.

He replied, “It would be more distracting if you were wearing only that rose,” which was heard by other members of his staff.

Ms Sharul, although shocked at his “inappropriate and offensive” remark, went through with the interview to honour her professional commitment.

However, a few minutes after it ended, she called the producer to speak of her discomfort with Mr Viswa’s comments.

“I expressed that I would not like be a part of the airing of this series, and that I needed an apology for the way I was disrespected in the process.

A sexual comment was casually made in the context of a professional environment, and it made me very uncomfortable, and distressed.”

The producer apologised and “immediately took action,” wrote Ms Sharul, and a short while later Mr Viswa apologised via email as well.

Later on, the comedian wrote about the incident over social media.

“I am sharing this because the irony is that I was invited, in my capacity of being a stand-up comedian who speaks out about women’s issues.

THIS is one of the biggest issues women face; workplace harassment. And If I don’t speak out about this, I am not being true to myself and what I stand for.

On her part, Ms Kiran responded on Ms Sharul’s post, saying she had been in a similar situation with Mr Viswa, not just once, but repeatedly. 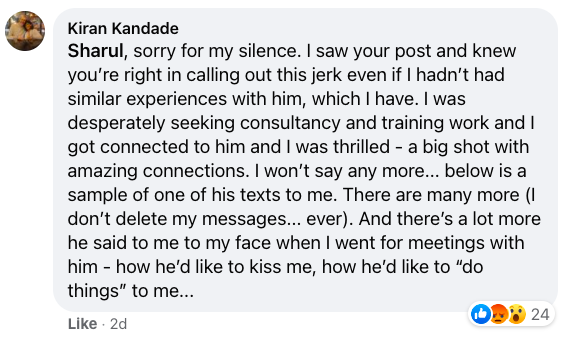 She also added a screenshot of one of the former NMP’s WhatsApp messages.

Since then, both women have received backlash for going public about Mr Viswa.

In commending Ms Sharul and Ms Kiran, AWARE wrote, “For society to progress beyond a state where the sexual harassment of women is commonplace, we need to be able to call this out when it occurs, talk about it openly, and hold people accountable for their actions. Sexual harassment is a sensitive topic and it is difficult to discuss these things calmly online. But we hope that we can all learn from the cases that Sharul and Kiran have so bravely shared, and work towards a better and more nuanced understanding of the issue.”