Home News Top 10 quotes of Transport Minister Khaw - nothing on the recent... 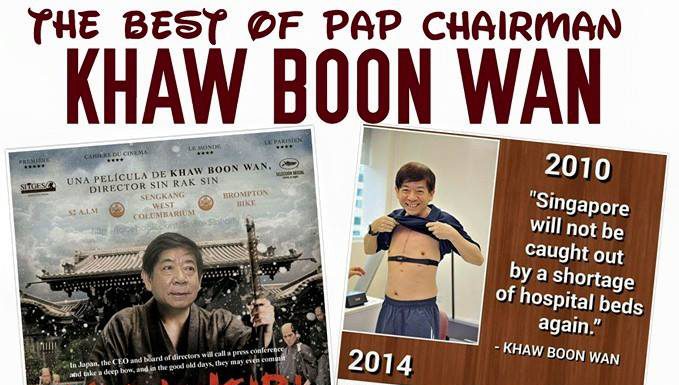 Transport Minister Khaw Boon Wan has not said much regarding the recent train delays which has frustrated many commuters. One reason could be because he is in Vietnam, making promises to the Communist Party of Vietnam to share the People’s Action Party’s experience with them. Mr Khaw is the chairman of PAP.

Even though Mr Khaw has not said anything on the recent train delays, he is not usually tongue-tied. The following are Mr Khaw’s top 10 quotes.

“In Japan, the chairman and CEO would call a press conference, take a deep bow and, in the good old days, they may even commit hara-kiri.”

“I work hard, I earn more, my medisave is bigger. You’re lazy, you work less, your medisave is small.”

“Singapore will not be caught out by a shortage of hospital beds again.”

“If they cannot find jobs, what is the point? You own a degree, but so what? That you can’t eat it. If that cannot give you a good life, a good job, it is meaningless.”

“Singaporeans could consider living in nursing homes in Johor Baru. It would be cheaper.”

6. ON AFFORDABILITY OF HEALTHCARE

“In my recent bypass surgery, my hospital bill was $8 only; yes, no typo here.”

“HDB flat sizes are not shrinking.”

8. ON AFFORDABILITY OF HDB FLATS

“When we said that families with $1,000 household income could afford two-room flats, we were not imagining things.”

“AIM was not an ordinary $2 company. It was set up by the PAP specifically… to help its PAP MPs do a better job running their town councils.. AIM was the only PAP-owned company.”

“A very popular Chinese opera, Butterfly Lovers, or Liang Zhu.. So there was this very young, beautiful, talented young lady, Zhu Yingtai, who wanted to study, so she disguised herself as a boy and succeeded in attending the school for three years.. People just assumed. So it’s a similar situation here, that the officers assessing the tender just assumed that it must be a company affiliated to some religious organisation.”

BONUS QUOTE: When a Hong Kong news agency broke the story that MRT trains were quietly shipped back to China for repairs.