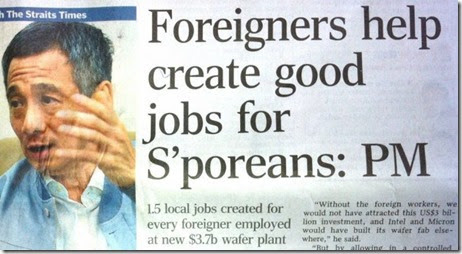 Thank you for the latest initiative to “solve missing trolley problems”.

By employing 4 trolley enforcement officers who work on shifts, your “Trolley Enforcement Project” has decreased our unemployment rate by 0.0001 %. Any job created during this economic downturn helps Singaporeans and should be considered a good job. This is in line with PM Lee’s message that “foreigners are actually creating more good jobs for citizens”. Allow me to explain.

Credit should be given where it is due, especially to CEO Seah Kian Peng.

Inconsiderate shoppers have confirmed they do not want to be educated over a decade. Despite this, CEO Seah has continued to display a positive, die die never give up attitude in trying to educate them. For his patience, he deserves a Tiger.

CEO Seah has also continued to allow the ‘T-loan’ of trolleys at other supermarkets, trolleys which are seldom returned to their owner. If Fairprice were CEO Seah’s family-run supermarket, he wouldn’t have put up with thousands of lost trolleys over the years. Another Tiger for his generosity.

Untypical of PAP, Seah has been upfront about his own defeat when he acknowledged the “limited success in addressing the issue … shoppers will always find a way to defeat any security system”. I guess he deserves another one for his honesty.

Although this chronic issue will not be resolved in the distant future, I believe Fairprice is in CEO Seah’s good hands.

My sincere thanks to NTUC Fairprice for having created more good jobs.