The HA started running a fever and showed symptoms of Covid-19 on March 28 after a trip to Malaysia, he is currently confined at the National Centre for Infectious Diseases

Singapore—On Monday evening (Mar 30), Tan Tock Seng Hospital (TTSH) announced on its Facebook page that one of its Health Attendants (HA) had tested positive for Covid-19. The attendant is now confined at the National Centre for Infectious Diseases (NCID) and is in stable condition, the hospital said in its post.

TTSH said that the male HA had been in Malaysia from March 16 to 17, just before the country implemented its Movement Control Order (MCO), on March 18. The HA started running a fever and showed symptoms of Covid-19 on March 28. After he began showing symptoms of the coronavirus, the HA no longer went to work.

At the moment, he is “resting well.” 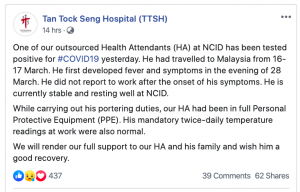 The hospital further clarified that while he went about his portering duties at TTSH, he had been clad in complete Personal Protective Equipment (PPE). And while he was still working, his temperature, which was taken twice daily, was normal.

TTSH added, “We will render our full support to our HA and his family and wish him a good recovery.”

According to the website of the Ministry of Health (MOH), he is patient 853.

“Case 853 is a 20 year-old male Malaysian national who is a Singapore Work Pass holder, and had been in Malaysia from 16 March to 17 March. He reported onset of symptoms on 28 March, and subsequent test results confirmed COVID-19 infection on 29 March afternoon. He is currently warded in an isolation room at the National Centre for Infectious Diseases.

He is employed as a porter at NCID, and had not gone to work after onset of symptoms.”

While some individuals commenting on the hospital’s post said that the HA should not have travelled, since the government had advised against it, other netizens were quick to defend him, saying it’s very likely he rushed home to Malaysia to gather his belongings due to the impending lockdown then rushed back to his job.

Other netizens wished the Health Attendant a speedy recovery, with some even thanking him and other healthcare workers for their service. The MOH said on Monday evening that there are 35 new cases of Covid-19 in Singapore, totalling 879. Of these, 228 have fully recovered and have been discharged from hospital, while 3 have died.

The Ministry announced that there are three new clusters of Covid-19 as well: S11 Dormitory @ Punggol at 2 Seletar North Link, Wilby Residences at 25 Wilby Road and Live music bar Hero’s at 69 Circular Road.

From the new cases of Covid-19, nine are imported cases, with the patients having travelled to Europe, North America, South America, Middle East, and countries in the ASEAN.

And of the remaining 26 cases, 12 are connected to previous Covid-19 cases or clusters, while links to the other 14 are still unknown. -/TISG