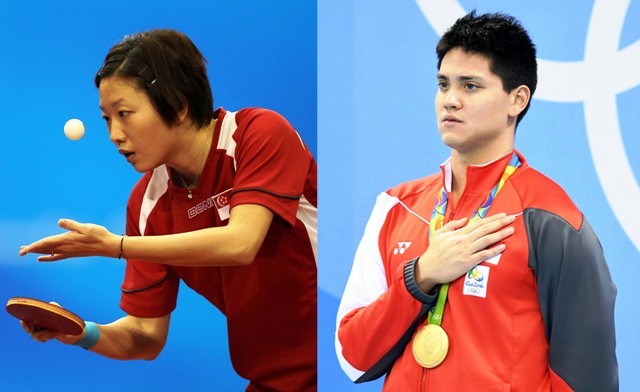 Since independence in 1965, Singapore did not win any Olympic medals until 43 years later in 2008, when it won a silver in the women’s table tennis team event. At the time, the team was led by team captain Li Jiawei. Eight years later, yesterday, Singapore won its first Olympic gold in the 100m butterfly swimming event. That gold was won by Joseph Schooling and this is their stories.

Li Jiawei is the only daughter of a Chinese government official and a housewife. She was was born on 9 August 1981 in Beijing, People’s Republic of China.

Li attended the Beijing Shichahai Sports School at the age of 9. At the age of 13, she entered the Beijing provincial team in 1994. A year later at 14 years of age, she was talent-scouted by Singaporean officials in Beijing. She then moved to Singapore and in the following year, she commenced her international career in competitive table tennis.

She became a Singaporean citizen at the age of 18 years under the Foreign Sports Talent Scheme in late 90s. Under the scheme, foreigners from overseas are brought into Singapore under contracts to train. Once they are good enough, they trade in their home-country citizenship to play for Singapore in international competitions.

Said Jackie Tay, director of the Singapore Table Tennis Association (STTA) in 2008, “We try to look for young, talented players below the age of 16 so that we have time to groom them technically and help them assimilate to the society.”

Indeed, STTA invested a lot of money, hiring world-class Chinese coaches to coach Li and her compatriots. One of them was Zhou Shu Sen who used to be a Chinese national coach and the head coach of Beijing table-tennis team. Some 20 of his students were later to enter the Chinese national team. At the 2008 Beijing Olympics, 4 out of 8 competitors during the quarter-finals of the women’s table tennis singles were all his students.

STTA was also able to raise millions of dollars for table tennis especially with PM Lee personally gracing STTA’s fund-raising events. For example, he attended a 2009 STTA’s event, thanking sponsors on behalf of STTA. He said:

“I would like to thank the sponsors for their very generous support to STTA and to Singapore sports, especially at this time when the economy is uncertain, businesses under pressure and companies have many other things to worry about and so do individuals. But despite that, Sam Goi has done a good job and you have been very generous and kind and we have raised more than a million dollars and we are very delighted at the result. Thank you all very much.”

Two years ago when she was stepping down as STTA President, MP Lee Bee Wah proudly proclaimed that she left STTA in prime financial health, with nearly $10 million raised during her tenure.

And indeed, with the backing of millions of dollars, world-class coaches, a Member of Parliament and even the Prime Minister, and of course a “foreign talent” herself, Li participated in 3 Olympics and won medals for 2.

In an interview in 2008, Li admitted that she didn’t like table tennis and did not play the game with passion. “I don’t like the game. I just did it when I was younger to condition my body,” she said. “Now it is my career and I have to face it.”

Even during the interview, the reporter noticed that Li got bored when talking about table tennis, but mentioned shopping or playing the piano, her face would brighten instantly. “I have more important things to do with my life,” she admitted to the reporter.

Despite living in Singapore for more than 10 years, Li spoke little English and preferred to converse in her native Mandarin, revealing that she hardly assimilated into Singapore society.

In 2008 after the Beijing Olympics, she married a Beijing businessman who is the owner of a pharmaceutical business. There was a grand dinner held in Beijing.

Her husband said in an interview, “When I first met her, she looked like she needed someone to take care of her. I am that person.”

On 27 Dec 2012, Li finally announced her retirement after the London Olympics at a press conference. Wiping away tears as she received a hug from MP Lee Bee Wah, she said, “I’ve dedicated 18 years of my life to the sport, and I will always be grateful to Singapore for believing in me.”

She told everyone that she would be living in Beijing together with her husband and son.

In all, she earned an estimated $1.27 million from cash awards by playing for Singapore.

Joseph Schooling is a native Singaporean born on 16 June 1995. He is a third-generation Eurasian Singaporean. His father, Colin Schooling, educated at Raffles Institution, was a hurdler and a water polo player, who represented Singapore in softball.

Schooling received his primary education at Anglo-Chinese School in Singapore and left to complete his education in the US after his second year of secondary school at ACS (Independent).

From baby, Schooling loves the water. As recounted by his parents in this Youtube video, the moment Schooling could crawl, one just couldn’t keep him away from the water. He simply loves being in the water.
[fvplayer src=”http://youtube.com/watch?v=uSVJM2o_UsM”]
His father also remembered an episode when Schooling was just 8 years old. He woke his father up at 4am. The father asked him if he knew what time it was. He replied yes. He just couldn’t wait for his father to bring him for his morning swimming practice. Such was the determination of Schooling, wanting to swim and wanting to excel in swimming from a very young age.

Schooling was already winning several gold medals in competitions at the age of 5. His parents decided to groom their only son to the best of their ability, going so far as to ensure he had access to swimming facilities to train during every vacation they took during his childhood.

In 2008, when the Singapore Swimming Association (SSA) shut down its Centre of Excellence, Schooling’s father was convinced by ex-SSA coach Jack Simon that training in the US was where Schooling would have the best chance of achieving his Olympic dream.

The Schoolings, who had to bear his school fees, expenses, transport and accommodation costs, took a leap of faith in 2009 and sent their only child abroad. His father, a businessman, estimated spending nearly US$1 million (more than S$1 million) on his son.

The mother said, “At first, I didn’t want him to go. But he told me ‘Mum, if I am to get an Olympic gold medal, I have to go’.” Eventually, the parents let him go because they love their son.

Then, it started a seven-year of struggle for the family. Financially, it drained the family. The mother said, “It is tough on family life, missing each other. Financially, it has also been a big juggle, using up all our reserves and having to budget like crazy… it has been tough on all of us.”

The government only supported up to $90,000 in median annual stipend for Schooling to train and compete only at the highest level.

So even with the S$1 million cash award that Schooling would later receive for his Olympic gold, the family would still be in the deficit.

Schooling is a product of the American system of training. When it was decided that he should go to US for his training, his parents contacted former Olympian medalist Sergio Lopez.

Lopez won the bronze medal for Spain in breaststroke at the 1988 Seoul Olympics but was making a name for himself as a master coach in the US.

Schooling then moved to Florida to train and live at the Bolles High School, where Lopez had just been appointed head coach, and they got to work straight away. Lopez focused on developing technique to allow Schooling’s body to grow naturally.

By 2011, Schooling was starting to make a name for himself. He won two gold medals at the SEA Games and qualified for the London Olympics in the 200m butterfly, but didn’t make it past the preliminaries.

He was faced with a dilemma in 2013 after he finished his high school at Bolles at 18 years old. He had been offered a scholarship at the University of Texas (and not the Singapore government) to train under Eddie Reese but had also been enlisted to start two years of National Service.

His mother fought very hard for MINDEF to defer Schooling’s NS. Eventually, the Schoolings were able to negotiate for their son’s long-term deferment from NS at the end of 2013. Schooling was permitted to defer for three years to allow him to train for the Olympics.

“I told them very clearly: I’m trying to teach my son to be loyal to this country,” said the mother. “But why should he be loyal to a country that doesn’t even support him when he wants to achieve swimming success for (Singapore)?”

She stressed that they “never pushed for swimming to be a substitute for NS” – in fact, her son should eventually serve NS like any Singaporean man, she said. According to her, letters from top coaches and experts all over the world wrote in to support Schooling’s deferment.

“They’re the ones who can see talent, and they say he will be world-class,” she added. “He can come back and do (NS) when he finishes swimming. It’s okay to get him into the pool of soldiers. Not a problem.”

She admitted, however, to initially anticipating backlash over Joseph’s deferment. “I was worried it would have an adverse effect, with people getting jealous, etc. But in the end a lot of support came in, and his fan base grew bigger,” she smiled.

With the NS deferment, Schooling then began to train under Reese at the University of Texas in the next 3 years. Reese was a two-time US Olympic men’s head coach. With Lopez having laid the groundwork for Schooling in Bolles High School, Reese began to apply the polish as Schooling grew and matured, training and racing against the world’s best in the US.

And yesterday, all the sacrifices have come to fruition. Schooling beat 7 other world champions in the 100m butterfly, including the legendary Michael Phelps, to clinch the Olympic Gold, with a new Olympic record of 50.39s.

A netizen said on social media, “You buy an Olympic medal you divide the nation. You cultivate your own winner, you unite the nation.”

Indeed, cultivated by his parents through their savings, Schooling truly unites the nation. Majulah Singapura!