The Independent News
Home News Featured News Snatch-theft in JB ends up with victims being horrifyingly run over by... 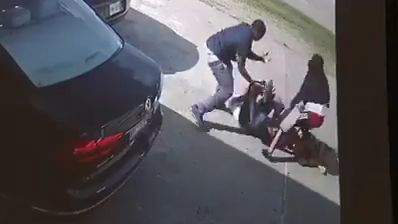 Evidence of a brutal snatch-theft incident emerged in a video form on 17 August 2018 via Whatsapp. The video that lasted one minute and forty seconds has yet to be confirmed by the authorities as there is no mention of it in the mainstream media as of today. It is highly suspected to have originated in Johor Bahru.

The video has captivated attention of the public due to its obnoxiously brazen and brutal nature. Believed to be a CCTV recording, a man’s could be overheard describing the chain of events that unfolded as the video was being played.

A woman innocently got down from the front passenger side of a car parked in front of what looked like a shophouse. The time stamp on the video was about nine thirty in the morning.

Before the woman was able to step into the doorway that led into a stairway, a man suddenly got down from a four wheeled car that parked on the opposite side of the road and attacked her. He tried to grab her rather large handbag but she would not let it go. She was then dragged to the front of the car by the robber.

The struggle continued with a man in white appearing from inside the shophouse who quickly took to fighting the robber in black. The woman kept het hold on the handbag while her friend was punched repeatedly by the black assailant.

That was when a second black car pulled up beside the woman’s parked car. By this time, the woman seemed to be free and again tried to head for the stairwell but she was stopped by the robber. It was at that moment that a second robber got down from the parked car and joined the first robber.

The video ended with the robbers successfully attaining the handbag because his accomplice reversed their get-away car over both the man and the woman. The woman and her male friend were left lying on the road side.

What was curiously eminent in that video was that it appeared like both perpetrators had their underwear on the outside of their pants. Perhaps it was meant as a identity mark among criminals but certainly a trademark that would be seriously noted by the police if a report was lodged of the robbery and investigations started on the case.