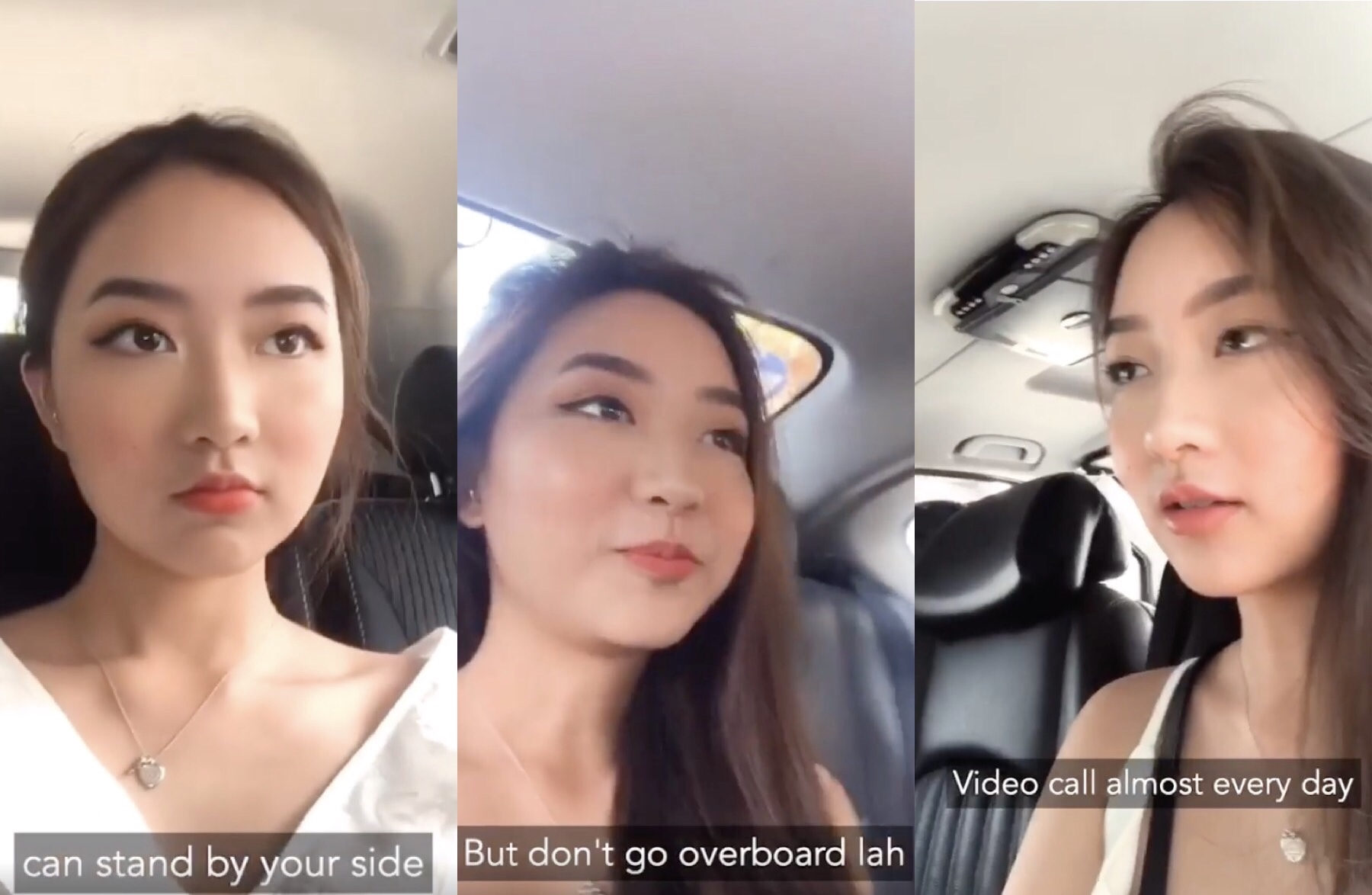 Singapore – Carrine Low, a popular figure in Instagram with her IGTV show called “Carrine Lowlife” and over 19.5k followers recently uploaded a video with content asking taxi drivers for love and relationship advice.

Ms. Low spent a week asking seven different taxi drivers questions each day. She got insights on how to choose between two boyfriends, how to maintain a long-distance relationship, what is the meaning of love, what to do with a boy who lacks self-esteem, how to approach a relationship with a big age gap, and what to do if a girl thinks her boyfriend is gay.

With taxi ‘uncles’ spending 10-12 hours a day on the road they were more than happy to make conversation with their passengers. The ones featured in the video sounded eager and sincere in answering the questions.

Here are some excerpts from her conversation:

T: Can I ask you for love advice?

T: What advice you want?

C: I have two boyfriends. Then one is very good to me. Another one is very rich. Which one should I choose?

C: Why you laugh?

T: There is no answer. Do you want love or do you want money?

T: My wife is in Penang. I’m in Singapore.

C: So how do you maintain it?

T: Video call almost every day. Twice or thrice a day. Both parties must have interest in one another.

T: You have to be open in what you do.

C: What do you think is love?

T: Anyone who loves you can stand by your side, whether you’re rich or poor.

T: I don’t have the money to spend. Will she love me?

T: She’d rather go for old man with a lot of CPF

T: It’s not like last time you’ve to be attached to one

T: Now I can tell you there’s no such thing as steady

C: Some of my friends, their girlfriends don’t let them talk to other girls

T: I haven’t marry you, you also like this. Once married, jialat. I cannot have friends already

T: If you don’t like to settle down, then go and have fun! But don’t go overboard lah

T: The person have a girlfriend you don’t go and kiss

T: You are young, very young. Ya’ll just go out and f*ck

C: My boyfriend does not let me hang out with my brother because he is a boy.

C: What should I do?

T: Yeah, because I think he has no self-esteem

C: He also always borrow my money to go to siam diu. Like thai disco.

T: Even if you’re married your husband shouldn’t be borrowing money from you

T: Not worth wasting your time

T: I do have friends who go for the fun of it. Then they see see see see. Eh? This thai disco so cheap. Then go there of course sit down. The mummy come, “Eh you dowan hang flower.” Then sure must hang

C: They have mummies one ah

T: Yeah. Give him a taste of his medicine

T: No no not so good. The mind the idea, different

C: Do you believe it’s love

C: If your friend your age said he got a 20-year old girlfriend, what’ll you tell your friend

T: (laughs) I don’t have friend

It was at this moment that Ms Low thought it best to end the conversation before things got awkward.

C: Have you ever experienced forbidden love?

T: A lot of my past relationships all quite forbidden.

T: Once I had a girlfriend, she’s 10 years older than me

C: How old were you?

T: This one you should ask your parents

C: Ok so I seriously think that my boyfriend is gay

C: Har but this is serious

T: I got a friend told me that he think his girlfriend is a les. Just straight away ask her

T: If the person is like trying to hide ah. Then try to make love lor. It’s very straightforward. If that person is homosexual, no matter what stupid thing they do in the bed right. Got no feeling means no feeling.

Ms. Low ended her video by expressing how grateful she was at all the wisdom the taxi drivers imparted and added, “Who needs therapy when you can just talk to taxi uncles?”