The Independent Singapore News
Home News Singapore's mayors: Who are they and what do they do?

Singapore’s mayors: Who are they and what do they do? 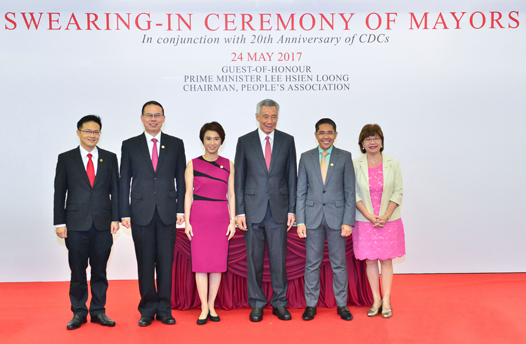 Singapore had a mayor for a short period from 1957 to 1959. Ong Eng Guan, who was the City Council mayor, later became the National Development Minister until he resigned following a power struggle with Lee Kuan Yew and the People’s Action Party leadership. That was so long ago that Singaporeans are arguably still not used to the idea of having mayors in their midst. When we mention mayors, Singaporeans instinctively think of New York’s Bill de Blasio or London’s Sadiq Khan where the mayors are given a prominent feature in the public spotlight. So here’s a surprise. We have five mayors. Who are they and what exactly do they do?”

What do they do?

Each mayor handles a specific district of Singapore. According to the Community Development Council (CDC) website, mayors also double up and sit as Chairman of each CDC in their particular district. Each council, consisting of one Chairman and between 12 and 80 members, is in charge of urban planning, zoning and other similar issues in their respective regions in line with national policy. It’s estimated that each district contains no less than 150,000 residents.

The CDC aims to build a caring and cohesive community, where they assist the needy, bond with the people and connect the community through the five CDC which fall under the People’s Association (PA), a Government Statutory Board under Ministry of Culture, Community and Youth (MCCY).

In a speech given by PM Lee Hsien Loong in 2014, he described the role of the mayors during their swearing in ceremony.

He said: “Mayors play key leading roles in the CDCs.  You have to motivate your councillors, grassroots leaders and volunteers, encourage new ideas to help the community, and most importantly, serve the people with your heart. So I urge Mayors to use the next few years well.  Lead the CDCs to meet changing needs.  Always remember the basic ABCs:  Assist the needy, Bond the people and Connect the community, and at the same time, continue to explore new ways to work with and serve a changing population.”

Former politician Mr Teo Ser Luck, who also served as the Mayor of the Northeast District, once said: “Mayors are in charge of taking the first steps towards building camaraderie within communities.”

Mr Teo also stated that Mayors also get to represent Singapore in several instances. For instance, his role as a mayor during the 2016 World Cities Summit allowed him to meet mayors from other cities to exchange ideas on sustainable development.

Fundamentally, it can be said that Mayors are supposedly in charge of community developments and have to work with grassroots leaders in their district to further community plans. Yet, they may also have opportunities for external interactions on an international level.

For purely mayoral-related concerns, Singapore has been split into five major areas: Central, North East, North West, South East and South West, with each mayor being assigned to handle the needs of each district.

The current mayors for each district are:

How are they selected?

Where the number of residents in a district is not less than 150,000, PA’s board of management is empowered to designate the Chairman of a CDC to be the Mayor for the district that the CDC is appointed for. However, there is limited information as to what the criteria is for one to be appointed mayor.

How much do they earn?

So, how much do our Mayors actually earn? Considering the controversy surrounding the salaries of our nation leaders, this would definitely be an interesting point of contention for the average Singaporean. As of January 2012, the nation’s mayors are estimated to earn a whopping S$660,000 (US$486,500) annually.

With the issue of Singapore having both an MP and a Mayor to represent the needs of Singaporeans, there are a couple of common questions.

“Do we need five mayors?”, is one of them, considering the MPs are elected precisely to look after the needs of residents.

“Why do mayors sometimes take on multiple portfolios?”, is another. Mr Teo Ser Luck, an elected MP after the 2011 General Elections held three portfolios as MP for Pasir Ris-Punggol GRC, Minister of State, and Mayor of the Northeast District.Follow us on Social Media