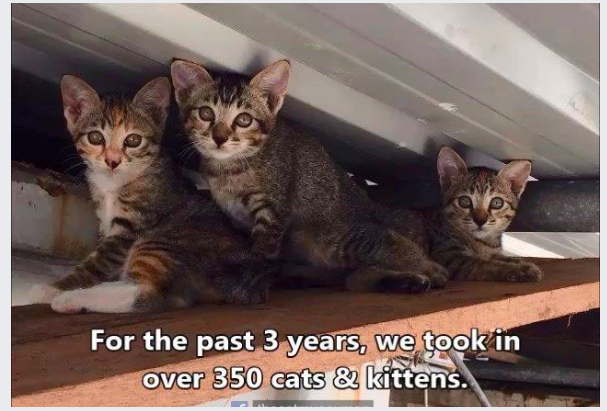 The lease for the Purvis Street location of The Cat Museum, Muses & Mansion, one of the few cat museums in the country, is expiring by June 10, and it founder is appealing for help from the public in order to continue to take care of their feline friends. The Cat Museum’s founders put up a video on their Facebook page on Thursday, January 25, announcing their campaign, “100 Days of Hope,” whose goal is to raise S$1 million to put a down payment on a new home.

After a dispute with officials last year concerning how the upper floors of the museum were being used, the owners of the building declined to renew The Cat Museum’s lease. Jessica Seet, founder of the museum, said that some of the felines will be housed by her and some other volunteers, but there are more than 20 kittens and cats looking for new homes and are up for adoption. Volunteers are encouraged to visit The Cat Museum and bond with the residents.

Ms. Seet has also said that last year’s difficulties gave her the idea that ownership is a better option for The Cat Museum, and that they hope to have their next establishment set up in the Civic District, to make it easier for visitors and potential “fur-parents” to access.

She and her team are hoping to open the new museum by the end of this year, and says that they will work in tandem with the Ministry of National Development (MND), in order to avoid past mistakes.

The team is looking for 10,000 “heroes,” donors who will give S$ 100 each, in order to raise the money that they need. They also asked others to share their video and their post, and gave several options for giving donations, even for donors who live in other countries.

Support and sympathy have poured in from netizens

Other netizens suggested that it’s time for Singapore to have government-led animal shelters that will take care of strays, similar to how it’s done in other developed countries.