The Ministry of Education’s (MOE) defense, that withholding exam results slips over unpaid school fees is a “long-standing practice,” has not gone over so well with Singaporeans who are urging the authority against punishing children for their family’s financial situations.

The MOE practice came to light on Monday (25 Nov) when socio-political activist Gilbert Goh described the plight of a needy student who was not able to collect her PSLE result slip due to unpaid school fees, in a Facebook post that went viral.

Revealing that the student had only been given a photocopy of her PSLE results slip since she had a backlog of unpaid school fees amounting to S$156 due to her family’s financial situation, Mr Goh said that the student would need the PSLE “certificate” to apply for secondary school admission.

Defending the practice of withholding original results slips due to fee arrears as one that is “long-standing”, MOE responded the next day and said that the student can still progress to secondary school using the photocopy of the results slip.

Asserting that the issue was “not about recovering the money,” MOE explained that the funding for each primary school student amounts to about S$12,000 each year and that students are expected to co-pay S$13 of miscellaneous fees every month.

Pointing out that it would be easier to reduce subsidies and financial assistance if the issue was about money, the ministry instead said: “MOE’s consideration stems from the underlying principle that notwithstanding the fact that the cost of education is almost entirely publicly funded, we should still play our part in paying a small fee, and it is not right to ignore that obligation, however small it is. We hope parents support us in reinforcing this message.”

Although MOE seems to suggest that Mr Goh may not have honorable intentions in exposing this issue on social media, the activist has actually been raising money to help needy student pay off their fee arrears and get their exam results slips. Mr Goh has also helped many needy families share their own experiences with MOE’s “long-standing practice.”

In a forum letter published by TODAY on Thursday (28 Nov), one Singaporean asserted that he was “appalled” to read MOE’s explanation and to discover that withholding exam results slips over fee arrears is a longstanding practice.

The forum letter writer, Steve Yong Kui Seng, said that MOE’s position that the policy is meant to represent the principle of paying a small fee as an obligation for heavily subsidised education “smacks of a transactional approach with little consideration for the possible immediate and long-term impact on the children involved.”

Criticising MOE for penalising children instead of going after parents for the non-payment of fees, Mr Yong asked: “Why is MOE punishing an innocent child for his or her parent’s inability to pay fees? Has MOE considered the emotions and sense of loss that the child has to face in receiving a different results slip from his or her schoolmates’?

“Is that not akin to shaming the innocent child in front of his or her schoolmates over a matter beyond his or her control? Is this the kind of education system and values that we want our young children to grow up with and believe in?

“And how does withholding the original results slip help in making parents pay overdue fees when it is not necessary for admission into secondary school?”

Echoing Mr Yong’s assessment that MOE’s policy unfairly penalises children for their family’s circumstances and their parents’ decisions, Singaporeans criticised the ministry for not extending more empathy to needy children and asserted that the practice is not fair just because it is a “long-standing” one: 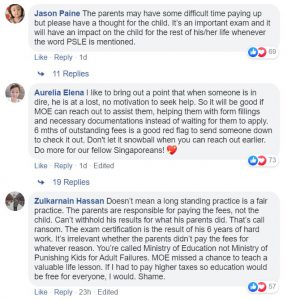 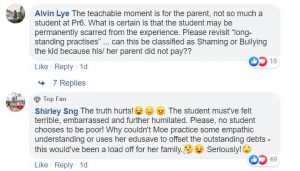 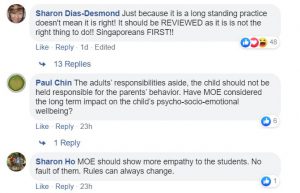 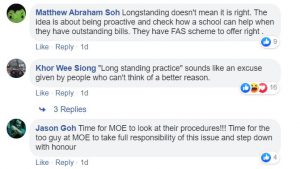