Roslan bin Bakar (“Roslan“) and Pausi Bin Jefridin (“Pausi“) are co-accused persons who were arrested in 2008 for drug trafficking. They were convicted of the offence and sentenced to death by the High Court on 22 April 2010. They have been on death row for 12 years, and behind bars for close to14 years.

According to death penalty activist and journalist Kirsten Han, their respective families only learnt of the impending executions on 9 February 2022. Pausi’s family, who are based in Sabah, are having difficulties travelling to Singapore on such short notice. She said that if the family is not able to secure a VTL-flight, then they will only be allowed to leave their hotels to visit Pausi in prison.

Last year, local and international attention was drawn to the case of Nagaenthran K Dharmalingam. Nagen’s case is still pending, but the Singapore Prison Service has scheduled other executions. Roslan and Pausi’s families were given a week’s notice. #DeathPenalty pic.twitter.com/LNiehVp0Sk

Throughout the past 14 years, they have filed a number of unsuccessful appeals. Unlike many Court decisions, the judgments for this case are quite brief, and written in a fairly accessible manner. We encourage you to read the grounds of decision for the trial in 2010, and the resentencing application in 2017, for yourself.

During their re-sentencing application, the lawyers for Roslan and Pausi both raised issues relating to their respective client’s alleged abnormality of mind.

Counsel for Pausi argued that his client, whose IQ level was assessed to be 67, has an “had an arrested or retarded development of mind as a result of his exceptionally low and restricted education“.

For purposes of comparison, Nagaentheran, whose execution was opposed by more than 100,000 people, was assessed to have an IQ of 69. 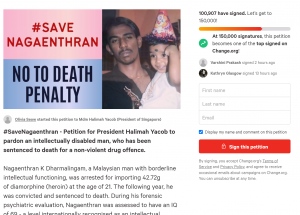 Counsel for Rozlan submitted that his client had “limited capacity for judgment, decision-making, consequential thinking, impulse control and executive function”.

Ultimately, the Court found that these matters did not change the outcome as, despite a low score, both Rozlan and Pausi “had displayed competence and comprehension of what they were doing when they carried out their act of trafficking in the drugs”.

Both their appeal’s against the High Court’s decision on resentencing were dismissed by Singapore’s Apex Court. on 26 September 2018.

Aside from the resentencing process, Roslan had also filed a criminal motion in 2015 to adduce new evidence, but his application was dismissed by the Court of Appeal on 9 May 2016.

Efforts against the Death Penalty

There’s no crowdfunding campaign for Roslan or Pausi right now, but we’re supporting Pausi’s family with travel costs out of our TJC Support Fund. If you’d like to contribute to this fund, follow this link: https://t.co/AOoXKtaGkN (select “support fund” in the dropdown menu)

If you wish to support the families of those who are on death row, please consider donating to the Transformative Justice Collective. WUSG understands that TJC will be helping Pausi’s family with travel costs. In addition to raising funds, TJC also tirelessly advocate for death row inmates in Singapore.