Singapore is ailing and the PAP is serving her poison 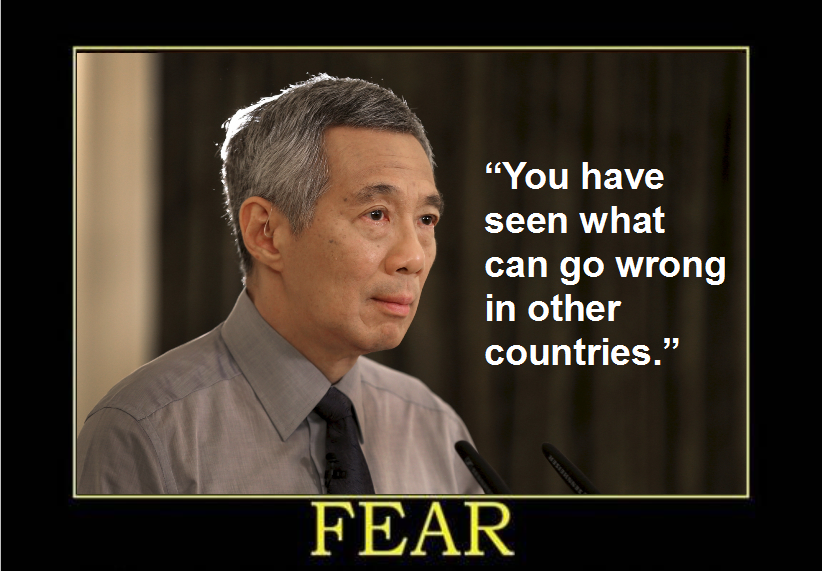 The world is in upheaval. South Koreans throng the streets demanding the removal of their president; Malaysians clash as they profess their love or loathing (depending on whether you don red or yellow apparel) for their prime minister; pro- and anti-Beijing Hong Kongers do battle over whether two young lawmakers should be disqualified from parliament; Pinoys and Pinays elected a Pope-cussing-Obama-hating-gun-happy politician as their national leader; the Brits up-ended order of every conceivable kind when they voted to leave the European Union; and now, half of Americans elected as their president someone whom the other half cannot find enough expletives to hurl at.

All this is enough to make Singaporeans want to quicken the search for another habitable planet to fly to.

Cue PM Lee: “In Singapore, we watch all this with concern and we have to ask ourselves how we can prevent ourselves from going in that direction. For 50 years we’ve been very lucky. We are still united, still proud of the country, still moving forward…So be aware that the risks are there, and you have seen what can go wrong in other countries.”

Translation: Singaporeans are lucky to have the PAP. So shun disruption, stick with the familiar. We may not be able to change the government but that is a good thing because citizens cannot be trusted to make the right decisions – just look at the other countries. The PAP will decide for us and protect us from the world’s madness.

This is what Singaporeans hear and have been hearing for half-a-century. The thinking has been baked into our national DNA.

It is also one that will ensure our country’s demise. It is this fear of the unfamiliar, fear of getting things wrong, fear of taking chances that will be Singapore’s undoing. For nothing in such an outlook fosters an innovative culture.

Welcoming the unknown, taking risks, making mistakes, embracing failure, encouraging derring-do – isn’t this what being innovative is all about?

The truth is that our economy is living on borrowed time. The dependence on multinationals to transfer skills and know-how, a hard-working and cheap labour force ready to work even harder and cheaper, and a bewildering bevy of government companies controlled by the Prime Minister’s wife is a model that may have worked in the past but is disastrously out-of-sync with rapidly changing times.

As it is, our economy, teetering on the brink of a recession, has been ailing for the last couple of years – this taking place despite the absence of a major world crisis. The danger is that it may signal the beginning of something protracted.

I can do no better than quote Steve Wozniak, Apple’s co-founder, who pointed out that a company like Apple could not have emerged from a place like Singapore: “Look at structured societies like Singapore, where are the creative people?…All the creative elements seem to disappear.”

It is a tragedy that Singaporeans are unable to see that Americans, Hong Kongers, or Britons are unafraid to take political chances, stand up to injustice – perceived or otherwise, and be their nation’s boss. So what if Brexit fails or China cracks down on Hong Kong or Donald Trump’s tenure turns out to be a disaster? They’ll learn, course-correct and improve their political systems in the long run.

What about us? We continue to be afraid of change because the PAP breeds and feeds the fear of change. We are cocooned in our comfort zone, unaware that we are sinking deeper into dysfunction and mediocrity and passed by societies ready and willing to change.

It has become a cliche, but still no less true, that this island on which we inhabit has precious little natural resources; nothing to mine for, drill at or grow on. This is why it is so troubling that those in power are strangulating the very thing that will ensure our survival and progress – the minds of our people.

What fertiliser does for crops, political freedom does for innovation. The messiness and seeming chaos that accompanies democracy must not be seen as societal threats to be bleached from our system. In our desire for peace and security, let us not inadvertently celebrate the peace of the cemetery and the security of the serf.

Political disruption (unfortunately, to many Singaporeans, this includes the simple act of electing a few more opposition MPs) is needed to energise the human spirit and provide that impetus for positive change.

May wisdom and courage prevail.

Murali Pillai brings up the cost residents would have to bear...

4 main reasons why Singapore has one of the lowest death...